Biologists have identified the world's most vulnerable coral reefs. Each so-called hot spot is a marine region rife with organisms found nowhere else and threatened by human influence. 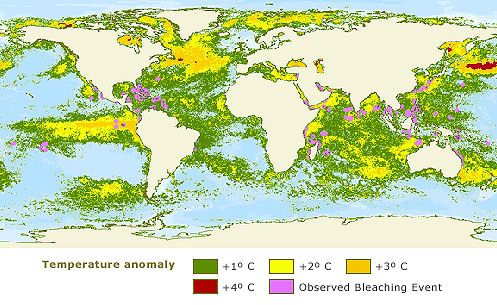 The 10 hot spots "represent very high priorities for conservation because they contain a disproportionately large fraction of the world's biological heritage," says Callum Roberts of the University of York in England. "By targeting these places rapidly, we could save far more species than if we invested the same amount in conservation in other places."

Roberts and his colleagues reported the list of hot spots, topped by the Philippines, in the Feb. 15 Science and simultaneously in Boston at the annual meeting of the American Association for the Advancement of Science.

To identify the most vulnerable zones, the researchers mapped the geographical ranges of 3,235 species of reef fish, corals, snails, and lobsters. They found 18 places rich in species found nowhere else.

Of those, 10 face a significant threat from hazards such as overfishing, coral mining, sea-temperature increases, and sediment runoff, the researchers determined.

Creating a conservation-priority list in this way "is absolutely the right approach," says Marjorie L. Reaka-Kudla of the University of Maryland in College Park. Although the 10 areas make up less than two-hundredths of a percent of the world's oceans, they contain 36 percent of the coral reef species that are most vulnerable to extinction. In her own research on crustaceans, Reaka-Kudla has found that a restricted range is the most important influence on whether an organism will go extinct.

Some of the hot spots will be easier to protect than others. For example, minimizing fishing is important but will be hard to implement in poor regions, says Roberts.

The list is a "nice first start" toward identifying regions for protection, comments Nancy Knowlton of the Scripps Institution of Oceanography in La Jolla, Calif. She notes a significant omission: reefs off Brazil. Roberts agrees, noting that recent data on this region didn't make it into his team's study. Moreover, Reaka-Kudla adds, future discoveries of new, small marine organisms could lead to the identification of yet more hot spots.