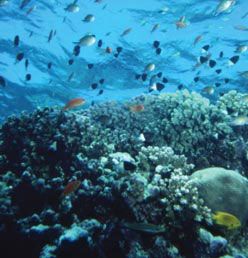 The Coral Sea is perhaps best known and celebrated for the area that occupies much of its western edge: the Great Barrier Reef, which fringes the northeastern Australian coast. The world's largest coral reef, it was designated as a World Heritage Site in 1981 in recognition of its extensive biological diversity and richness; six years earlier, the Australian government established the Great Barrier Reef Marine Park, which regulates some activities (such as fishing) in some areas and bans them altogether in others.

Now, a new report suggests that a similar degree of protection should be extended to the sea as a whole, an area of nearly 1 million square kilometers (386,000 square miles) that would create the world's largest marine park. The report, Australia's Coral Sea: A Biophysical Profile, published Friday by the Pew Environment Group, notes that, while the Barrier Reef may be the sea's most famed feature, the Coral Sea contains 18 shallow reef systems which, because of their "small size, isolation from each other and high exposure to cyclones and storms," may in fact be more vulnerable than their larger, better-known cousin. Altogether, says the report, the sea contains 49 different habitats, "from thickly forested islands to small sandy cays" that provide nesting and feeding areas for endangered green turtles and 36 species of seabirds.
The East Australia current forms in the Coral Sea, carrying warm water and tropical species southward; partly as a result, the sea is a global biological hotspot for large marine species. It is home to at least 28 species of whales, dolphins and porpoises, and to 52 species of deep-water sharks, rays and chimeras, 18 of which are found nowhere else. It is the site of the world's only known spawning aggregation of black marlin, and one of only three known spawning aggregations of lanternfish, which attract large, feeding schools of tuna, billfish and marlins - making the Coral Sea one of the last remaining places where such species can be found en masse.
However, the report notes that 341 bird and animal species in the sea are listed on the International Union for the Conservation of Nature (IUCN) Red List of Threatened Species, 51 percent of which show declining population trends. Hence, Pew's call for protective action.