Posted by bchristo on Thursday, 11 August 2011 in Animals

Humans hate change, and they hate moving to suit someone else’s agenda—that’s why politicians avoid projects that require eminent domain. Animals and plants don’t deal particularly well with change, either. They’ve adapted to live in a certain types of places, after all. But the massive amount of carbon pollution humans release into the atmosphere is going to fundamentally alter those animals' and plants' comfy niches, which means they're going to have to move to survive. 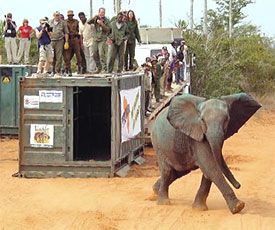 If they don't relocate, they’ll get new neighbors, as more aggressive species better suited to the climate move in. Their old food sources, whether animal or vegetable, will die off or move on.
So scientists are looking at how to help animals relocate on their own volition. Earlier this summer, the Wildlife Conservation Society recommended that 888,000 acres of public land in Montana be dedicated to species like grizzly bears, mountain goats, and bighorn sheep. The WCS recommended that these areas be federally protected from development so animals driven out of other areas could live there in peace.

Meanwhile, other scientists are considering how to speed up animals' move to a more suitable habitat. This strategy has a slew of creepy names—“managed relocation,” “assisted migration,” or “assisted colonization”—which make it sound like the scientists are part of a less-than-savory authoritarian regime. And not all scientists agree it’s a good idea. The goal is to increase biodiversity, after all, and moving species can have unintended impacts on the plants and animals already living in their new neighborhood.
As one group of researchers points out, though, these moves are already happening. An experiment in England, for instance, transplanted marbled white butterflies significantly north of where they’d been living to prove that it was possible. The researchers put aside the question of whether humans should be relocating animal and plant populations and looked at how they could best go about this task.
They developed a framework for making these decisions that takes into account the size of the population in question, how many individuals the new habitat could support, and how many might die as result of the transfer. They also suggested that some smaller populations should be given time to shore up their numbers before being moved. The clinical term “translocation losses” doesn’t do justice to what these decisions entail: choosing to potentially sacrifice some members of population for the greater good of the species, with no guarantee that moving would benefit the group long-term.
But the alternative is just as scary. Climate scientists predict that one in 10 species will be extinct by 2100 as a result of climate change. The more species that disappear, the greater the likelihood that basic natural processes like photosynthesis will stop functioning properly. And that’s exactly the opposite of what the planet needs.