If the Interisland Wind Project brought 400 megawatts of wind power from Lanai and Molokai to Oahu as planned, this would bring the island's total wind power to 500 megawatts, meeting increasing energy needs 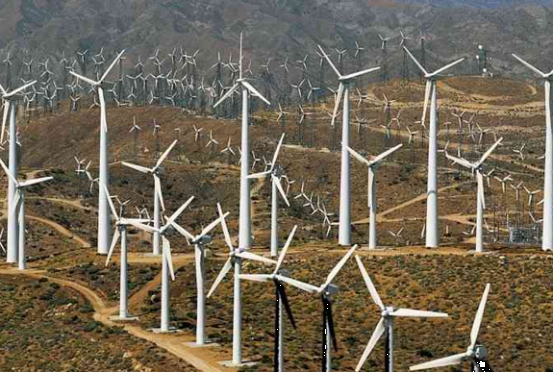 A new study has found that an additional 400 megawatts of wind power, coupled with existing wind farms and solar energy, could provide 25 percent of Oahu's projected electricity demand. The study, which is the Oahu Wind Integration Study, was conducted by the Hawaii Natural Energy Institute at the University of Hawaii at Manoa, the Hawaiian Electric Company and General Electric Company. The study found that the energy needs of Oahu are increasing. Currently, low sulfur fuel oil (LSFO) and coal are burned annually to meet energy needs on the island.
But if the Interisland Wind Project brought 400 megawatts of wind power from Lanai and Molokai to Oahu as planned, this would bring the island's total wind power to 500 megawatts. This, along with 100 megawatts of solar power found on Oahu, could eliminate the need to burn 2.8 million barrels of LSFO and 132,000 tons of coal annually.
"The findings of this study show it is feasible to integrate large-scale wind and solar projects on Oahu but also have value beyond Hawaii," said Dr. Rick Rocheleau, Director of the Hawaii Natural Energy Institute. "Both large mainland utilities and relatively small and/or isolated grids that wish to integrate significant amounts of renewable energy while maintaining reliability for their customers can learn from this study." The study also provided recommendations that should be combined with the additional wind power, which include increasing power reserves in order to help manage wind variability, providing cutting edge wind power forecasting, increasing ramp rates of Hawaiian Electric's thermal generating units, reducing minimum stable operating power of baseload generating units, providing severe weather monitoring and evaluating other resources that can contribute reserve. "To reach our renewable energy goals, we need to use all the resources available to us," said Robbie Alm, Hawaiian Electric executive vice president. "For Oahu, this includes the utility-scale solar, roof-top solar, waste-to-energy and on-island wind that we are pursuing. But on-island resources are not enough to meet Oahu's power needs." Alm added that the study shows the benefits of alternative energy technology, but presents financial and environmental challenges that must be overcome before it is implemented. However, he sees the study as being an "essential first step for the Interisland Wind Project."