Posted by plantitfilm on Tuesday, 09 August 2011 in Climate Change

The ice caps are still melting, the ozone layer is still disappearing and Al Gore is getting pissed. 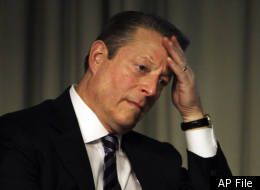 In a speech at the Aspen Institute last week the former Vice President hid no emotion when he disputed claims that global warming was not happening by repeatedly shouting “bullsh*t.”

One audience memeber said Gore's speech was a "tour de force of ideas expressed with humor, passion and insight," according to the conference's coordinator Charlie Firestone, the executive director of the Apsen Institute's Communication and Society Program.

Gore went on to say that the “organized activity” of these “pseudo-scientists” has “polluted” public opinion on climate change.

“There is no longer a shared reality on an issue like climate even though our very existence of our civilization is at threat. People have no idea,” Gore said. “It’s no longer acceptable in mixed company, meaning bipartisan company, to use the godd*mn word climate. They have polluted this to the point where we cannot possibly come to an agreement on it.”

While the jury may still be out on the public’s opinion, President Obama has shown that he, at least, is on Gore’s side. The Obama Administration has poured more than $90 billion into clean energy in the past three years, almost all of which came from stimulus funds in the Recovery Act.

But in the five years since Gore released his climate change documentary An Inconvenient Truth, just how much progress has been made toward his goal of reducing carbon emissions?

Not much, if you look at the big picture of overall greenhouse gas emissions. In fact from 1990 to 2009 emissions increased 7.3 percent, according to a 2011 Environmental Protection Agency report.

There is a glimmer of progress, though. In both 2008 and 2009 emissions decreased by 2.8 percent and 6.1 percent respectively. The report noted that the decrease was probably due in large part to the economic recession which caused a decrease in energy consumption, suggesting that emissions could rise again as the economy picks up.

The two largest contributors of greenhouse gases were the transportation and electricity generation sectors, which together account for about 60 percent of all emissions.

The president announced today a new set of energy efficiency standards that could help decrease transportation’s share of emissions by reducing oil consumption by 530 million barrels over the lifespan of heavy trucks and buses produced between 2014 and 2018, the administration claims.

The new standards will require reductions in fuel consumption by 23 percent for semi-trucks, 15 percent for heavy-duty pick-up trucks and vans, and 10 percent for buses, delivery trucks and garbage trucks.

Considering the United States consumes almost 7 billion barrels of oil every year, these new efficiency standards will be just a drop in the barrel toward the sweeping greenhouse gas reductions that Gore has been advocating for over the past decade.