Posted by ep-admin on Wednesday, 16 March 2011 in Earth Violators 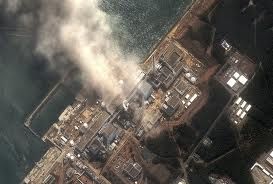 Winds are set to blow low-level radiation from Japan's quake-crippled nuclear power plant out over the Pacific Ocean in coming hours, easing health worries after drifting toward Tokyo early on Tuesday, experts said.

After the more serious 1986 Chernobyl disaster in the Soviet Union, radiation blew around the northern hemisphere in about three weeks. One U.N. study said Chernobyl may eventually cause up to 9,000 deaths, mainly from extra cancers near the plant.

"The cloud is going in the direction of Tokyo for the next 15 to 20 hours or so," said Gerhard Wotawa, of the Austrian weather service ZAMG who is advising the International Atomic Energy Agency (IAEA).

"Then it will go out toward the Pacific," he told Reuters. "At some point this will also spread around the world." With prevailing winds, Canada and the United States might be first to detect a much diluted cloud.

New explosions on Tuesday at the Fukushima plant, 240 km (180 miles) north of the capital, released low levels of radiation, worsening the crisis caused by Japan's worst quake on record on Friday which triggered a devastating tsunami. More than 10,000 are feared dead.

Japan told the U.N. nuclear watchdog a spent fuel storage "pond" was on fire and radioactivity was being released directly into the atmosphere. Prime Minister Naoto Kan urged people within 30 kms of the plant to stay indoors.