Posted by Wolf on Monday, 10 September 2012 in Clean Technology

The 'Silent Green Revolution' Underway at the Department of Energy 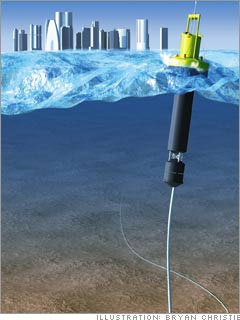 Last week, the New York Times reported on an exciting new energy project that is scheduled to begin testing off the coast of Oregon in early October. A company called Ocean Power Technologies is going to lower a 260-ton generator into the Pacific ocean, just 2.5 miles from the shore, in order to capture renewable energy from waves. The buoy generator will link up to the grid and, if it works, could generate enough electricity to power 1,000 homes.

Like many new experiments in renewable energy, the Oregon project was partially funded by a grant from the Department of Energy. In previous decades, the Department of Energy drove basic research by operating giant government-funded labs, but under the leadership of Energy Secretary and Nobel Laureate Steven Chu, the agency has transformed itself into something different: the biggest, greenest venture capital firm in the world.

After receiving an unprecedented surge in funding for renewable energy courtesy of the American Recovery and Reinvestment Act, Chu set to work hiring big names from the nation's top research laboratories, in order to staff a new agency called ARPA-E, modeled after DARPA, the R&D wing of the Pentagon. In just three years, ARPA-E has made more than 180 investments in basic research projects in renewable energy, and that's in addition to grants issued by the Department of Energy proper, like the one that funded the Ocean Power Technologies project in Oregon.

Michael Grunwald, a veteran reporter for TIME Magazine, is the author of The New New Deal,  a new book that details the history of the much-maligned American Recovery and Reinvestment Act (commonly referred to as the Stimulus bill). In preparing to write The New New Deal, Grunwald did extensive research on the Department of Energy's Stimulus-funded quest to uncover an energy alternative to fossil fuels. Recently, I talked to Grunwald about his new book and the "silent green revolution" that is currently underway at the Department of Energy.