Posted by henryfool on Tuesday, 19 July 2011 in Wildlife Conservation

Two men suspected of killing endangered tigers in Thailand have been arrested, a U.S. conservation group said Thursday, and the key evidence turned out to be cell phone images of them with their prizes. 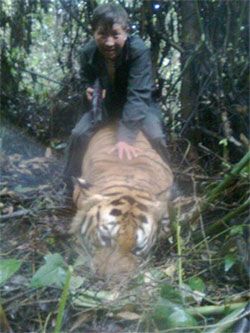 A phone with the images was seized after a gun battle between Thai park rangers and suspected poachers in a protected area, the Wildlife Conservation Society said in a statement.

"The rangers also found other evidence of poaching, including animal body parts and insecticides that are sometimes used to poison tigers," the group stated.

The images led to three men, one of whom escaped and two who were arrested. The group is thought to have killed up to 10 tigers in the region — a significant number given that only 2,500 breeding adult tigers are left in the wild globally.

"When confronted with 'trophy' images of themselves posing over a dead tiger, the suspects claimed the big cat was poached in Myanmar in 2003," WCS said. "According to WCS Thailand staff, however, the tiger (identified by its unique stripe patterns) was a well-known male tiger that researchers had tracked with camera traps in Thailand for at least three years between 2008-2011."

The society said it believes the men are part of "an organized crime ring that WCS and other partners have been tracking in this region for the past year." 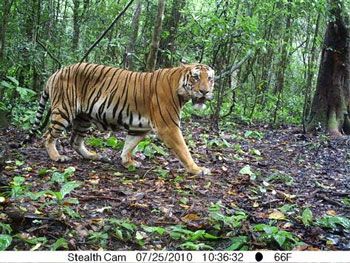 The Wildlife Conservation Society, based in New York, has helped Thailand and other governments with funding and training for beefed up patrols to protect wildlife.

"Such work comes with great risk to the park rangers working on the frontlines of enforcement," WCS noted. "One officer was shot in a nearby community on Friday in what is believed to be retaliation for the recent poaching arrests. The ranger remains in serious condition in the hospital."

Tigers have lost ninety percent of their historic range — which spread across Asia from Turkey to eastern Russia — according to TRAFFIC, a wildlife trade monitoring group funded by the World Wildlife Fund and the International Union for the Conservation of Nature.

Tigers are poached mainly for their pelts and bones, which are used in traditional Asian medicines.