Thanks to the vigilant eye of camera traps stationed high in Afghanistan's remote northeast mountains, researchers have uncovered exciting news: A population of endangered snow leopards, one of the most elusive big cats on the planet, is thriving in the region.

The big cats live among the dramatic peaks of the desolate Wakhan Corridor, a narrow strip of land 220 miles (354 kilometers) long, and sandwiched between Tajikistan to the north, Pakistan to the south, and a tiny border with China to the east. 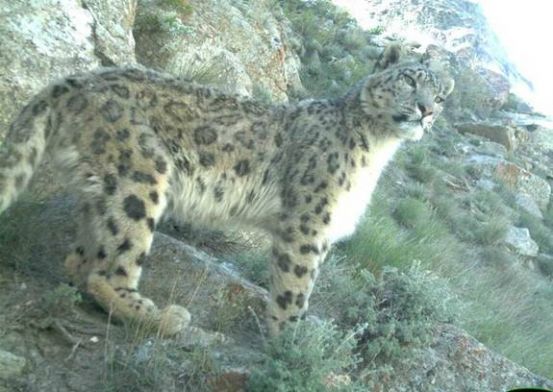 Camera traps captured shots of the spotted cats at 16 different locations across the region, the first time the technology has been used in Afghanistan to document the rare animals.

"This is a wonderful discovery; it shows that there is real hope for snow leopards in Afghanistan," said Peter Zahler, deputy director for Asia Programs at the Wildlife Conservation Society, in a statement.

Although snow leopards once roamed many of Central Asia's mountain regions, the species has suffered declines as high as 20 percent in the last 16 years. Researchers with the Wildlife Conservation Society, the organization that conducted the camera trap studies, say a mere 4,500 to 7,500 snow leopards still wander in the wild.

"Now our goal is to ensure that these magnificent animals have a secure future as a key part of Afghanistan's natural heritage," Zahler said.

A Wildlife Conservation Society study examining the plight of snow leopards in Afghanistan — the species is threatened by poaching, the illegal pet trade and run-ins with angry shepherds who don't appreciate the cats eating their charges — was published in the June 29 issue of the Journal of Environmental Studies.