Posted by ep-admin on Monday, 17 January 2011 in Sustainable Development

How Green Jobs Are Fueling The Economy 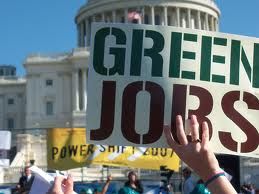 Creating new well-paying jobs to spur the economic recovery remains a central concern globally and in the US. The Great Recession has left many professionals and their families struggling to make ends meet for over two years. This jobless recovery is likely to be the longest recovery since the Great Depression. Furthermore, the convergence of automation and globalization have resulted in permanent changes in jobs across many industries.

For instance, manufacturing and construction jobs are today more technical and requiring more education than 20 years ago. Due to the same pressure of automation and globalization, middle management jobs are also disappearing.

Most importantly, these lost jobs are likely not to come back as the economy recovers. Larry Summers, who recently stepped down as the White House top economic adviser, made this point very clearly today during his interview on Fareed Zakaria's GPS on CNN: "Some of the jobs that were lost aren't going to come back, but some of the jobs are going to come in new places," Summers said.

The good news for responsible professionals and socio-eco innovators is that green jobs are likely to fuel the recovery both globally and in the US. Globally, research from the United Nations Environmental Programme (UNEP) has shown that a shift to a a low-carbon and sustainable economy can create millions of green jobs across many sectors of the economy. Similarly, the employment outlook from the US Department of Labor for job growth between 2008-2018 indicated a significant growth of green jobs this. Of course, this prediction is largely based on President Obama's pledge to invest $150 billion to create 5 million green jobs in the US over the next 10 years. The focus on green jobs is tremendously important not only to create jobs, but also to have a tremendous positive impact on our environment.