Posted by peter.gephart@gmail.com on Sunday, 18 September 2011 in Fossil Fuels

The Deepwater Horizon disaster: Who is at fault? 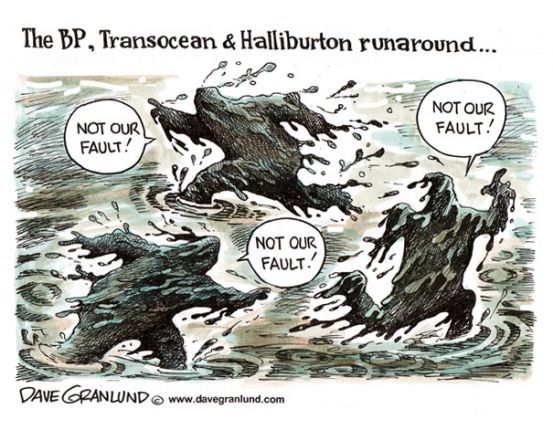 With much of the gulf coast region still feeling the effects of the BP oil spill in April 2010, the question of who is to blame for this disaster is on many people’s minds. The issue may never be completely resolved, especially for those who lost family members and profits from the spill. However, there may be an answer to this question now, or at least a partial one. A report put out by the Bureau of Ocean Energy Management, Regulation, and Enforcement (BOEMRE), which is formerly known as the Minerals Management Service (MMS), and the Coast Guard, puts the blame on multiple companies. The report states that BP, Transocean, and other contractors such as Halliburton that were involved in the complete process and permitting of the Deepwater Horizon well are all to blame, according to the report. Cutting corners and changing plans last minute are mentioned as possible reasons for the blowout and explosion. There is one more critical aspect that must be examined, and it is the entire regulatory process that allowed many of these mistakes to happen in the first place.

Although there were laws and regulations in place governing the entire permitting and operations process, it has been concluded that there was room for improvement. It may not be necessary to re-structure all the laws that are in place to prevent disasters like this from happening in the first place, but rather change who has authority to enforce each one. Much of that has been already done, as it seems like many of the agencies overlooked the fact that they themselves may have played a larger role in this disaster than BP, Transocean, and Halliburton. A September 2009 safety audit revealed 390 maintenance issues with the Deepwater Horizon, and many were considered high priority. Some of the rig components, including the Blowout Preventor, were past inspection dates and crucial alarms had been disabled. However, the repairs would have taken over 3000 hours of labor to fix and cost BP and Transocean millions in lost production time. Thus, only some of the issues were corrected because crews were under pressure to get the repairs done. This is an example of a corner that was cut, and quite possibly an example of regulation that was overlooked or even ignored completely. This is just one example of a long list of what went wrong and the events leading up to it, according to a World Resources Institute report from January 2011. The entire report can be downloaded here:

This disaster was the worst oil spill in history, but perhaps displays a much more prominent message. The people who were directly affected from it will never completely get their lives back, or at least not how they were before it happened. The message that needs to be displayed from this is that although there are laws and regulations governing the actions of agencies in charge of overseeing the companies involved, they are not effective unless properly utilized and enforced. It is fair to place blame on BP, Halliburton, and Transocean, but what about blaming the agencies in charge of overseeing the entire process from beginning to end? That will likely need to be a necessary step in order to promise the citizens of the gulf coast region and the rest of the world that this will never happen again.