Posted by Wolf on Wednesday, 14 September 2011 in Arts and Entertainment 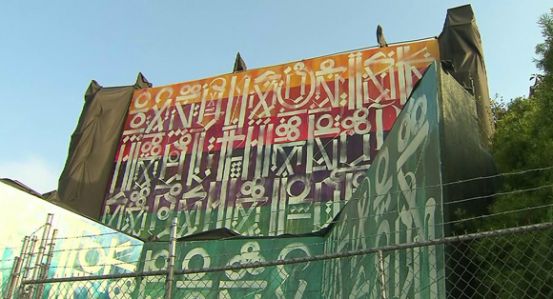 SANTA MONICA, Calif. (KTLA) -- A Santa Monica homeowner, who recently unveiled his giant "Oceans at Risk" art installation live on KTLA, is in hot water with the city.

Several residents complained about the graffiti-style artwork, which is displayed on the side of Adam Corlin's 3-story home, located at 825 Berkeley Street.
The city is demanding Corlin take down the installation or face a $25,000-a-day fine, calling the structure unsafe and a public nuisance.

Corlin says he installed a fence and hired a security guard in order to keep the property safe.
He also says he planned from the beginning to take down the artwork on Monday, September 19 -- two days after Coastal Cleanup Day. The volunteer project -- one of the largest in the country -- was the inspiration for the installation, which was spray painted by graffiti artist Risk in honor of Heal the Bay.
Corlin says he would still like to keep the artwork up as planned. Several attorneys have offered to take his case for free.
Corlin says once the installation is taken down it will be sent to "an undisclosed place."
Corlin says several residents, willing to display the installation on their properties, have contacted him as well as museums.
He'd prefer to leave the artwork in Santa Monica.
"I'd like to work with the city. It's, in my opinion, a beautiful piece of art."
Heal the Bay says the controversy has only helped their cause.