Posted by plantitfilm on Monday, 05 September 2011 in Oil Spill 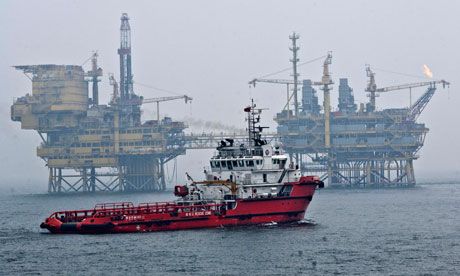 The oil spills from offshore wells operated by ConocoPhillips in China's Bohai Bay are posing political and technical challenges for the oil company far messier than the crude and drilling mud seeping from the seabed.

The company said Monday that it had complied with a government order to suspend all drilling, water injection and production at the affected Penglai 19-3 oil field, one of China's biggest.

Operations are currently stopped at 180 producing wells and 51 injecting wells, for a total of 231 wells, said a statement by Houston, Texas-based ConocoPhillips, which operates the field in a venture with state-owned China National Offshore Oil Corp.

CNOOC, which owns 51 percent of the venture, said the suspension of production in Penglai 19-3 would reduce output by 40,000 barrels a day, in addition to the 22,000 barrels a day lost with the shutdown of the two wells where the spills occurred.

For such big oil companies, the loss is not a major blow, though for ConocoPhillips, Penglai 19-3 is its largest project in China, noted Thomas Grieder, analyst for Asia-Pacific energy at IHS Global Insight.

The spills began in early June and have unleashed a flood of criticism inside China over how ConocoPhillips has handled the cleanup. The State Oceanic Administration rejected the company's assertion that it had met an Aug. 31 deadline to completely clear up any damage and prevent further seeps.

Chinese maritime authorities facing pressure from fisheries and environmentalists to minimize further damage to the already heavily polluted Bohai appear to have lost patience with the prolonged effort to staunch the oil seeps.

"ConocoPhillips has not been able to address this problem for two months and the Chinese authorities are losing face. It's kind of an inevitable reaction to something that's been going on a while," Grieder said.

Regardless of the tensions provoked by the spills, China is relying ever more heavily on foreign partners for the technology it needs to tap difficult to exploit deepwater oil reserves, said Grieder.

According to ConocoPhillips, the spills released about 700 barrels of oil into Bohai Bay and 2,500 barrels of mineral oil-based drilling mud, which is used for lubrication, onto the seabed. All but a small fraction of that oil and mud has been recovered, and the small amounts still emerging are from earlier seeps that have been shifting under layers of sand on the seabed, it says.

But the State Oceanic Administration contends that monitoring by satellite, underwater robots and other means shows the oil is still seeping. It criticized ConocoPhillips' containment measures as stopgap and said the company may have caused oil to seep through faults in the seabed by putting too much pressure on the oil reservoir.

Dong Xiucheng, a professor at the China University of Petroleum, described the accident as "unusual."

"It is hard technically to find the reason and the exact location of the spill and to try to stop it since it is on the seabed not in a pipeline. Both ConocoPhillips and CNOOC must have tried to do it, but it takes time," Dong said.

ConocoPhillips has pointed to safety concerns and other difficulties in capping and cleaning up the oil and mud in murky seas with minimal visibility.

"Addressing the issue is rather complex," Grieder said. "They're trying to identify small cracks on the sea floor in a situation where you can't see much."

ConocoPhillips said Monday that divers were continuing to search the ocean floor and that remote-controlled robots were taking seabed samples to monitor the situation. The company said it was working with CNOOC on a plan to reduce pressure in the oil reservoir and was preparing a revised environmental impact report.

The maritime authority has said it is preparing to file lawsuits on behalf of those who suffered losses due to pollution from the spill.

Apart from frictions over the pace and progress of the cleanup, state-run media and environmentalists have been lobbying for harsher penalties for such accidents - current law calls for maximum fines of 200,000 yuan (less than $31,000).

"Not only is the oil spill worse than the company reported but, despite its assurances to the contrary, it has failed to bring the situation under full control and find and stop the sources of the spills," it said. "Obviously, China needs to learn a lesson from this incident."

ConocoPhillips has denied allegations that it sought to mislead the maritime authority by falsely claiming to have stopped and cleaned up the oil seeps. The company said it was committed to complying with the law and conducting "all business activities with the highest ethical standards."

"This commitment fully applies to how we conduct our business in China," it said.

ConocoPhillips requested a correction of a weekend news report on state-run China Central Television. The report claimed that a ConocoPhillips China employee interviewed by marine radio said the company was deliberately deceiving the State Oceanic Administration in reporting that the oil spills had been fully contained and cleaned up.

"The ConocoPhillips China employee interviewed by CCTV did not make the negative comment which CCTV is attributing to him," it said.