Posted by ep-admin on Thursday, 02 December 2010 in Wildlife Conservation

Polar bears 'spotted swimming with cubs on back' 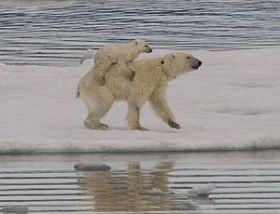 Polar bears have been spotted carrying their cubs on their backs while they swim through icy waters, according to an article in UK online newspaper the Telegraph. According to the article, the practice is thought to be the result of the bears having to swim longer distances in the sea because of recent reductions in the arctic summer sea ice.

This claim supports research conducted by the Norwegian Polar Institute, which says that travelling on the mother's back could be vital for the survival of polar bear cubs during swims in waters surrounding scattered sea ice, which is prime seal-hunting territory for the animals.

Geoff York, WWF's polar bear conservation coordinator, says this behaviour by polar bears and their cubs is likely not new, it has just not been documented before.

and have become more common for polar bears," York explained.