Posted by Wolf on Monday, 03 September 2012 in Animals 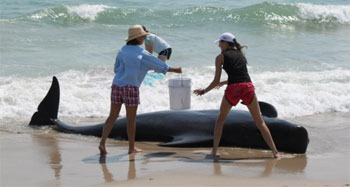 Five pilot whales are expected to survive after a 22-member whale pod stranded itself at Avalon Beach State Park on Florida's eastern coast this weekend.

The sudden, unexplained stranding brought an army of volunteers who tried to keep the whales hydrated and upright Saturday. Residents covered the beached whales with towels and drenched them with buckets of water, ultimately to little avail.

“I got down there to snap a few pictures but only took a handful before I threw the camera down and jumped in,” one volunteer, Waldo Waldie, wrote in a Facebook album with photos of the effort. “We moved a few of them closer to water and were keeping them hydrated, but apparently they are just going to euthanize them.”

Pilot whales are highly social and pods are tightly knit, which can make recovery in such situations a tough effort.

“Typically, they stay together as a group,” Blair Mase, stranding coordinator for the Southeast Region with the National Oceanographic and Atmospheric Administration, told the Palm Beach Post. “So if one animal is sick, they all come ashore. If you push them into the water, they'll just keep coming back and stranding themselves again." 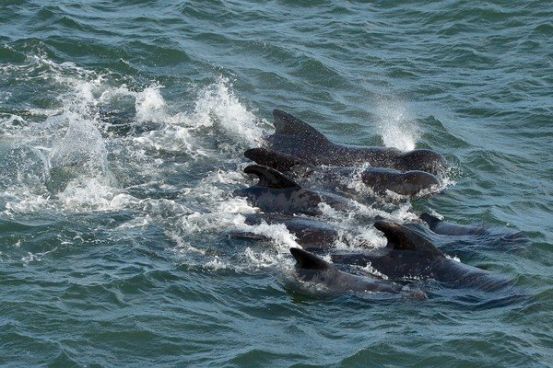 Another pilot whale pod beached on the coast of Fife in Scotland, resulting in 16 deaths and uncertain fates for the 10 remaining whales sent back to sea.

In Florida, the five young survivors — two males and three females — were taken to the Harbor Branch Oceanographic Institute, where experts say the whales are doing OK.

“They've all been through a pretty stressful ordeal,” Dr. Michelle Davis, senior veterinarian for SeaWorld Orlando, told the Associated Press. “We've seen each of them, at one point or another, have a little bit of trouble and need a little bit of help.”

The whales are being tube-fed a “fish milkshake” of ground-up fish, vitamins and minerals every four hours while teams of volunteers watch their recovery around the clock. Some survivors were breathing irregularly at times and drifting away from the group.

One calf, the youngest, was still nursing and needed to be taught to drink formula from a bottle; its mother apparently died on the beach.

“The goal is for the whales to transition to SeaWorld Orlando for long-term care and, ultimately, be returned back to the ocean,” Harbor Branch Oceanographic Institute officials said in a statement.

The trip to SeaWorld could happen in about a week after the whales gain enough strength, the AP reported.

Scientists told the Palm Beach Post they were expecting to examine the beached remains to learn more about the species.

Justin Riney, chief executive of Mother Ocean, an environmental advocacy group, has been posting Facebook photos and updates about the surviving whales.

“All five pilot whales are swimming together this morning and talking up a storm,” he wrote on Sunday. “What an amazing recovery after yesterday's events. Hopefully we'll see more progress throughout the day.”