Posted by Wolf on Thursday, 09 June 2011 in Climate Change

The hottest summer day you remember from childhood could be the norm in a few decades; in fact it looks like the heat has already been cranked up. 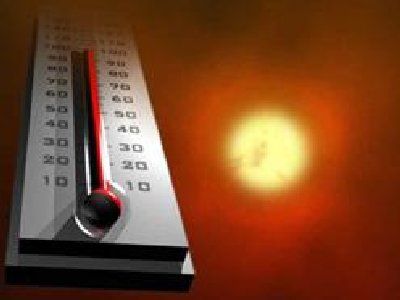 "When scientists talk about global warming causing more heat waves, people often ask if that means that the hottest temperatures will become 'the new normal,'" said Noah Diffenbaugh, an assistant professor of environmental Earth system science at Stanford, in a press release.

"That got us thinking –- at what point can we expect the coolest seasonal temperatures to always be hotter than the historically highest temperatures for that season?" wondered Diffenbaugh.

Diffenbaugh is lead author of a study to be published later this month in the journal Climate Change. Stanford research assistant Martin Scherer co-authored the study.

"According to our projections, large areas of the globe are likely to warm up so quickly that, by the middle of this century, even the coolest summers will be hotter than the hottest summers of the past 50 years," said Diffenbaugh.

Within the next 20 to 60 years, if greenhouse gas levels continue to rise, summer temperatures are likely to rise irreversibly around the globe, with the tropics feeling the heat first, and parts of Africa, Asia and the Americas suffering unprecedented summer heat within the next two decades, according to Diffenbaugh's study. The middle latitudes, including Europe, China and the United States, will feel the heat within 60 years, they report.

But evidence suggests that these summer heat extremes are already happening.

"We also analyzed historical data from weather stations around the world to see if the projected emergence of unprecedented heat had already begun," Diffenbaugh said. "It turns out that when we look back in time using temperature records, we find that this extreme heat emergence is occurring now, and that climate models represent the historical patterns remarkably well."

The authors point to the tropics as the poster child for increased summer heat.

"We find that the most immediate increase in extreme seasonal heat occurs in the tropics, with up to 70 percent of seasons in the early 21st century (2010-2039) exceeding the late-20th century maximum," the authors wrote.

"The fact that we're already seeing these changes in historical weather observations, and that they match climate model simulations so closely, increases our confidence that our projections of permanent escalations in seasonal temperatures within the next few decades are well founded," Diffenbaugh said.

Diffenbaugh and Scherer based their predictions on more than 50 climate model experiments. By looking at models that represented the behavior of the worlds' temperatures over the last half century, as well as models for how temperatures will change in the future, the researchers forecast that much of the world will experience a permanent increase in seasonal temperatures within 60 years.

The models were based on relatively moderate forecasts of greenhouse gas emissions for the 21st century.