Posted by bchristo on Wednesday, 08 June 2011 in Fossil Fuels

The Second Battle of Blair Mountain

The Second Battle of Blair Mountain
Posted: 08 Jun 2011 08:35 AM PDT
Guest post from Chuck Belmont Keeney, Ph.D. the descendant of famed UMWA organized Frank Keeney.  The March on Blair Mountain is currently happening in Southern WV.  For more information and to support the march visit www.marchonblairmountain.org 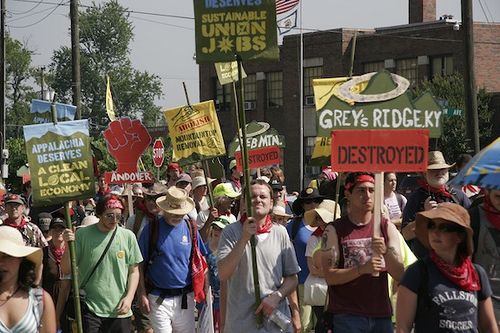 Walking the road to Blair Mountain, we pass an elementary school. Several of the teachers have taken their classes outside. The children and the teachers cheer us as we walk by.

Minutes later a man slows by the protesters in his pickup truck. He gives us the middle finger and yells, “Get a job, tree huggers!”

A few more paces and we witness an elderly couple on their front porch. They clap and nod. I notice that the old woman is crying. She tells us to keep going.

Others drive by and hurl obscenities in our direction. One sign on a house reads, “Thank You Marchers.” Another sign on a telephone pole warns, “Go Back To Where You Came From.”

Behold the road to Blair Mountain, where another civil war looms in the hills of Appalachia. Ninety years before, 10,000 armed coal miners marched to secure a decent living and to be treated as human beings. They fought an army paid for by the coal operators at the Battle of Blair Mountain. Miners bled and died to provide a better future for their children and, consequently, lay the groundwork for the privilege of weekends off, forty hour work weeks, and many of the other benefits that workers today enjoy. To date the Battle of Blair Mountain is the largest labor uprising in the history of our country.

Today there is a Second Battle of Blair Mountain. The coal companies want to destroy this historic ground with mountaintop removal and we are trying to save it. Marchers brave the heat, intimidation of the coal companies, and the ugliness of some who oppose us. When we originally planned the five day march we arranged to stay at various parks and campsites along the way. While many of these places initially welcomed us, they have all, within the last few days, told us that we can no longer stay at their sites. We then found alternative camp sites. These places too, have since withdrawn their support. Some of them have refused us because of threats from the coal companies; others have not given us specific reasons. What we do know is that many of the owners of these campsites were very hospitable at first, but have since said with regret that we cannot rest on their property. Therefore, we are forced to shuttle marchers back and forth from our headquarters at Marmet each day.

Nonetheless, we march on.

We march to preserve our national heritage. We march to stand up for labor rights. We march to save our water and air from the most destructive form of coal mining ever devised. Communities were divided in 1921 during the miners’ rebellion and communities are divided now. Yet our spirits are high and our faith unwavering. For we know that we stand upon the moral high ground and we ask that the rest of the country stand with us. On Saturday, June 11, 2011 we will hold a rally at the foot of this mountain where speakers and activists such as Robert Kennedy Jr., Ken Hechler, Ashley Judd, the indomitable Larry Gibson, and hundreds of citizens from all over America will raise their voices to the heavens in the triumph of our cause.

Nothing like this has ever happened to me before. Nine months ago, I was just a young history professor content to write my books and teach my classes. Now I find myself in the thick of a movement that commemorates one of the most unique stories in our nation’s history. I have a personal connection to this history, for my great-grandfather was one of the leaders of the miners in 1921. Today, my connection is even more personal as I march alongside so many brave men and women who have become my friends and compatriots. Thus, to the rest of the country, I say this:

Do not hesitate. Join us on the road to victory!