Posted by grant on Tuesday, 31 May 2011 in Ocean/Seas/Coastlines

Firefighters used their jet to spray the mammal, which was reported alive but partially submerged on the beach at Redcar in Cleveland on Tuesday.

A Cleveland fire brigade spokesman said the whale died despite efforts to save it. 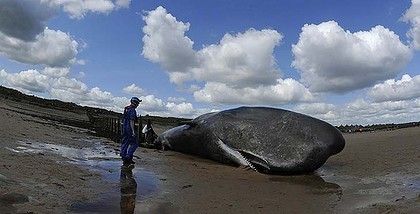