Posted by Angel on Sunday, 04 November 2012 in Sustainable Development

GO VOTE FOR THE ENVIRONMENT 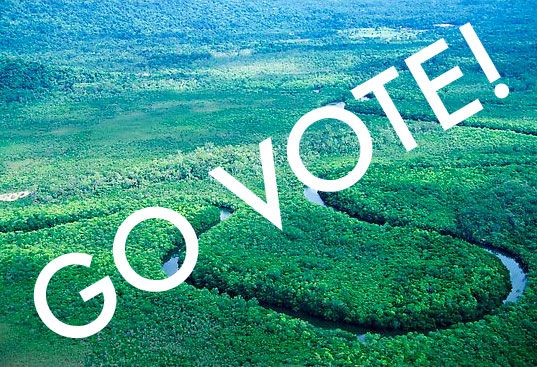 In case you’ve been living under a rock, today is election day in the U. S of A – and we’re super excited for the possibilities that this hotly contested presidential election brings. If you are anything like most Americans, you’ve probably been following this election in the news, online, and on SNL, and you probably realize the monumental changes this election could bring to US politics. Now, more than any other time, it is crucial that you exercise your right as a citizen to have a say in our democracy – so go vote right now! We hope you have gone to the polls already, or are making plans to go later today. If you think your vote doesn’t really matter, just think back to the 2000 presidential election where we ended up with the George W. Bush disaster for eight years, based on 537 contested ballots in Florida. Just think, if a few hundred more people had gotten out to vote (or if a few hundred voting booths had worked properly), we might have ended up with Al Gore as president. And just think how different things would be today if that were the case. Think of what a better state our environment would be in today if Gore had won in 2000.

VOTE FOR THE ENVIRONMENT!

But just because the past eight years of Bush administration have wreaked environmental havoc, doesn’t mean that there isn’t still hope to turn things around and put an end to global warming. We are now finally on the cusp of a major opportunity to turn things around in our environmental policies – so every vote counts. We hope most of you have already researched the candidates and made up your minds about who to vote for, but in case you are still on the fence – consider this:

+ STOP RELIANCE ON FOSSIL FUELS Sarah Palin and John McCain believe that our currently energy crisis can be solved by more oil drilling, and by continuing to rely on fossil fuels as our most dominant energy source.

‘Our opponents say, again and again, that drilling will not solve all of America’s energy problems—but the fact that drilling won’t solve every problem is no excuse to do nothing at all. Starting in January, in a McCain-Palin administration, we’re going to lay more pipelines…build more nuclear plants…create jobs with clean coal…’

+ THERE’S NO SUCH THING AS CLEAN COAL John McCain repeatedly talks about needing to invest money in Clean Coal – despite the fact that ‘Clean Coal’ does not exist, but instead is mere greenwashing by the coal industry to try to make their product sound more environmentally palatable.

+ DO WE WANT A KILLER IN THE WHITE HOUSE? Finally, I know some of you are going say ‘What does this matter in terms of energy?’ and ‘Why are you getting all Humane Society on me, when global warming is at stake’ – but I think its important to remind you all that Sarah Palin likes to shoot and kill animals. She likes to shoot moose, elk, and even wolf puppies out of helicopters. Sarah Palin likes to kill things. This may not have much apparent relevance to energy policies, but I think it speaks volumes not only about Sarah Palin’s environmental position, but also about her moral character. Do we really want someone who enjoys killing things to be leading this country?

+ ENVIRONMENT = OBAMA/BIDEN If you care about the environment, Obama-Biden is the clear choice. Barack Obama has the initiative and the passion to actually change things in Washington and get us back on the right course.

Okay, well I think I’ve made my personal positions pretty clear. Whatever your views, it is imperative that you exercise your political power and VOTE! If you are still reading this blog, what are you waiting for!