Posted by amir on Monday, 16 January 2012 in Ocean/Seas/Coastlines 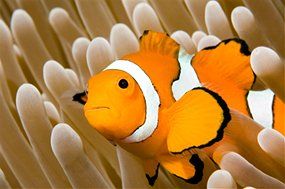 Can you imagine seas and oceans completely bereft of colourful fish? The possibility may not be all that far-fetched, thanks to rising carbon dioxide (CO2) emissions. By the end of the century, CO2 concentrations in seas will interfere with fish's ability to hear, smell, turn and evade predators, says Phillip Munday, professor at the ARC Centre of Excellence for Coral Reef Studies and the James Cook University.

Munday said around 2.3 billion tonnes of human CO2 emissions dissolve into the oceans every year, home to fish and other species, altering their chemical environment. "We've now established it isn't simply the acidification of the oceans that is causing disruption - as is the case with shellfish and plankton with chalky skeletons - but the actual dissolved CO2 itself is damaging the fish's nervous systems." Munday and colleagues have presented evidence that high CO2 levels in sea water disrupt a key brain receptor in fish, modifying their behaviour and sensory ability. "Our early work showed that the sense of smell of baby fish was harmed by higher CO2 in the water - meaning they found it harder to locate a reef to settle on or detect the warning smell of a predator fish. But we suspected there was much more to it than the loss of ability to smell." The team then examined whether fish's sense of hearing - used to locate and home in on reefs at night, and avoid them during the day - was affected. "The answer is, yes it was." Other work showed the fish also tended to lose their natural instinct to turn left or right - an important factor in schooling behaviour which also makes them more vulnerable, as lone fish are easily eaten by predators.