Posted by Cathym on Wednesday, 20 August 2014 in Wildlife Conservation

Which Turtle Will Swim the Farther? 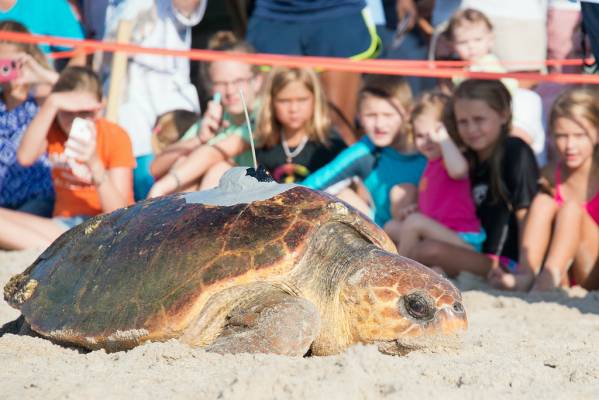 Loggerhead Melba was released in Florida on July 27, 2014

A crowd of more than 1,000 people gathered to watch as STC researchers released two adult female loggerhead sea turtles, named ‘Shelley’ and ‘Melba,’ into the ocean to begin their migrations. ‘Shelley’ was named by her sponsors at Ripley’s Aquariums while ‘Melba‘ was named via STC’s Facebook contest. Shelley and Melba are just two of 11 sea turtles representing four different species swimming in the TdT migration marathon, an annual program that conducts valuable research and raises public awareness about sea turtles.

The 2014 TdT included live turtle releases in Panama, Costa Rica, Nevis and Florida. The final release is on August 15 at Sombrero Beach, Fla. This year is the first time that a rehabilitated loggerhead turtle is competing in the TdT. ‘Pine Tyme‘, an 80 pound sub-adult loggerhead, was spotted struggling on the surface unable to dive and is now being treated at The Turtle Hospital in Marathon, Florida. Upon recovery, Pine Tyme will be equipped with a satellite transmitter and released from Sombrero Beach, Fla. on August 15 at 1:00 p.m. This is also is STC’s first ever release in the Keys.

Green turtle Esperanza was released in Tortuguero on July 3, 2014

“This is the seventh year of the Tour de Turtles and we are thrilled with how the program has grown and gained popularity over the years,” said David Godfrey, executive director of STC. “More people are turning out for the live release events and logging onto the website to learn about these turtles than ever before. Not only do we have a diverse group of turtles this year, but also a very diverse group of sponsors supporting this educational program. It’s amazing to see the variety of businesses, from resorts, to lighting companies and aquariums, that come together to raise awareness for sea turtles.”

Before releasing each turtle, STC scientists attach a satellite transmitter to its shell using turtle-safe epoxy or fiberglass resin. The transmitters allow STC and the public to track the turtles as they migrate from their nesting beaches to their foraging grounds. Turtle fans can follow the turtles’ migrations online at www.tourdeturtles.org, and cheer on on their favorite competitor while learning about some of the threats sea turtles face. Fans cansupport their favorite turtle through a virtual adoption or by making a pledge for each mile the turtle swims. The turtle who swims the farthest by October 31 will be crowned the winner of the ‘race’ while the turtle who raises the most money will be crowned the ‘People’s Choice Winner.’

Results from the 2013 Tour de Turtles. Who will win this year’s race??

Some interesting facts about the 2014 Tour de Turtles:

‘Esperanza’, a green sea turtle sponsored by Contiki and the TreadRight Foundation, is swimming to raise awareness about the threat of egg harvesting for consumption. After she laid her eggs on July 3, 2014, it was discovered that her nest had been poached and her eggs stolen! Luckily, the local police were able to catch the poacher and return the eggs to STC’s team, who quickly and carefully reburied them in a new location. Hopefully we’ll see some green hatchlings erupting from Esperanza’s nest in September!

‘Sugar’, a hawksbill sponsored by Four Seasons Resort Nevis, already had flipper tags when STC found her nesting on Lovers Beach, Nevis. After looking up her tag number, STC was able to determine that she was first tagged by the Nevis Turtle Group in 2007. This was great news because it provided further evidence that sea turtles return to the same beach to nest.

‘Melba’, a loggerhead sponsored by the Sea Turtle Grants Program, ranks in the top five largest loggerheads STC has ever released! She also has one of the biggest heads, which is fitting as loggerheads get their name from their exceptionally large heads.

For a full list of turtle competitors and sponsors, visit the official website at www.tourdeturtles.org or head back to the blog tomorrow to meet all the turtles!