Posted by Angel on Wednesday, 17 August 2016 in Climate Change 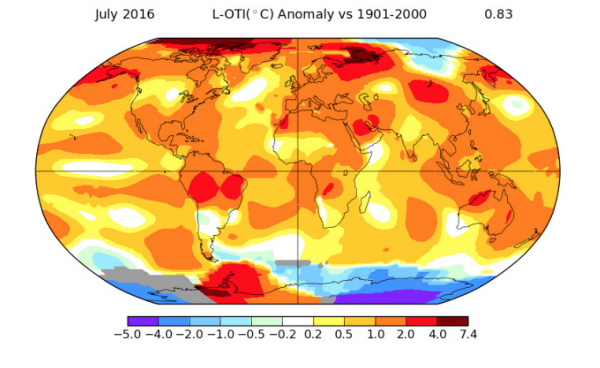 Wartime mobilization is needed to fight climate change, July racks up as the hottest month ever recorded and Antarctic carbon dioxide reaches levels unseen for millions of years. It's What's Up in Climate Change.

We may not realize it, but we're in the midst of a war. According to climate scientist Bill McKibben - Schumann Distinguished Scholar at Middlebury College and co-founder of 350.org - it is a difficult war to spot for the average citizen of the planet, but it is still being fought, and things are not going well for us at all.

According to his recent article for New Republic:

We’re used to war as metaphor: the war on poverty, the war on drugs, the war on cancer. Usually this is just a rhetorical device, a way of saying, “We need to focus our attention and marshal our forces to fix something we don’t like.” But this is no metaphor. By most of the ways we measure wars, climate change is the real deal: Carbon and methane are seizing physical territory, sowing havoc and panic, racking up casualties, and even destabilizing governments. (Over the past few years, record-setting droughts have helped undermine the brutal strongman of Syria and fuel the rise of Boko Haram in Nigeria.) It’s not that global warming is like a world war. It is a world war. Its first victims, ironically, are those who have done the least to cause the crisis. But it’s a world war aimed at us all. And if we lose, we will be as decimated and helpless as the losers in every conflict--except that this time, there will be no winners, and no end to the planetwide occupation that follows.
The question is not, are we in a world war? The question is, will we fight back? And if we do, can we actually defeat an enemy as powerful and inexorable as the laws of physics?

McKibben's recommendation to fight this threat: Mobilization, on the scale of what was seen in the United States during World War II, specifically to shift our economies, as quickly as possible, over to entirely renewable forms of power generation.

Why the WWII comparison? It will take the same level of commitment and effort, to retool factories and put a massive labour force behind this - not to build weapons, planes and tanks this time, but instead to churn out solar panels, wind turbines and electric vehicles.

That may seem like a tall task, but it can be done. A team of scientists at Stanford University, led by Mark Jacobson, the director of Stanford's Atmosphere and Energy Program, not only has a plan for the United States to convert entirely to renewable energy by 2050, but his team has compiled plans for a total of 139 nations around the world - over 71 per cent of those in attendance at the 2015 Paris Climate Conference.

For example, according to the Stanford plan, by 2050, Canada could generate 100% of its power needs from a combination of solar, wind, geothermal, hydro, wave and tidal sources.

According to the Stanford plan, implementing this would avoid over 9,500 air pollution deaths per year, it would save us 4.3 cents per kiloWatt-hour in energy costs (when you factor in both the average direct cost and the associated health/climate costs of using fossil fuels), and we'd each save $8,887 in energy, health and climate costs every year. It would take up less than one-third of a percent of our available land space, and the plan would even pay for itself in as little as 2 years, when you take everything - including the air pollution and climate cost savings - into account.

For the 15th month straight, global temperatures have set a new record. According to NASA, NOAA and the Japanese Meteorological Agency, July 2016 was not only the hottest July ever recorded, but it was the hottest month, of any month, of any year, going back 137 years. 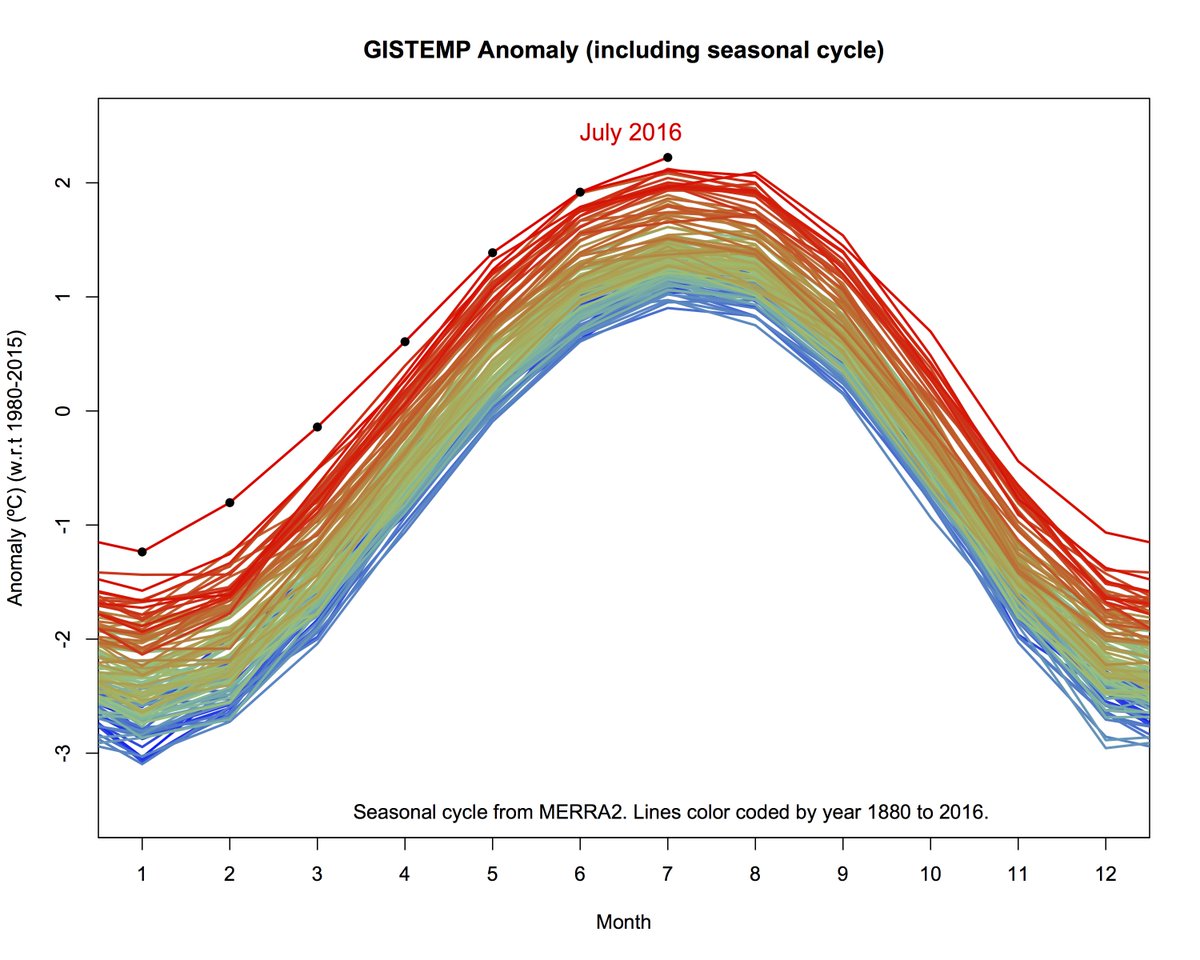 July 2016 was absolutely the hottest month since the instrumental records began.

What does this mean for the rest of the year? 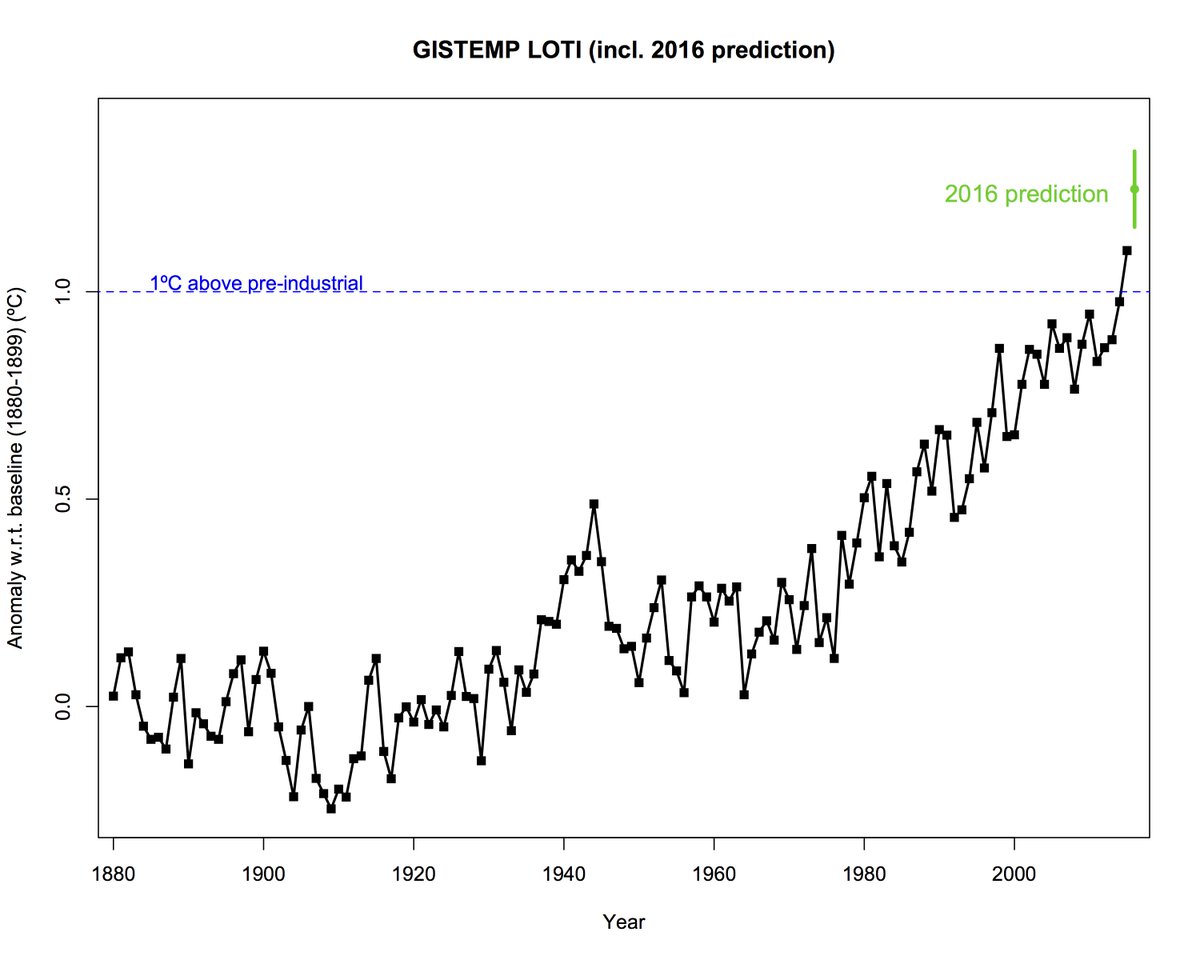 Scientists have carbon dioxide monitors stationed at some of the most remote places on the planet, to gauge just how much CO2 is collecting in the atmosphere without being directly influenced by local sources. The top of Mauna Loa, in Hawaii, is one location, which results in the Keeling Curve, maintained by the Scripps Institution of Oceanography. Although volcanoes are known to emit CO2 from time to time, the scientists at this location are very careful about removing the influence of what they see from Mauna Loa, to see what the background carbon dioxide is at roughly 3,400 metres above mean sea level.

Another important location, and possibly the most remote we have, is at the South Pole. It's taken a few years longer than anywhere else, but as of May 23, 2016, daily average carbon dioxide levels over Antarctica reached over 400 parts per million (Mauna Loa crossed that threshold in May of 2013).

Daily CO2 measurements at the South Pole, from 2014 to present day. Credit: NOAA

According to NOAA, based on samples taken from ice cores, carbon dioxide concentrations haven't been this high at the South Pole in around 4 million years!

400 ppm of carbon dioxide is not a significant tipping point for the climate (at least we hope not, anyway), but it does represent the highest concentrations in our atmosphere since our genetic ancestors began walking on two legs, and thus shows just how much we are altering the planet's ecosystem with our current way of life.