Posted by planetmedia on Tuesday, 21 February 2017 in Fossil Fuels 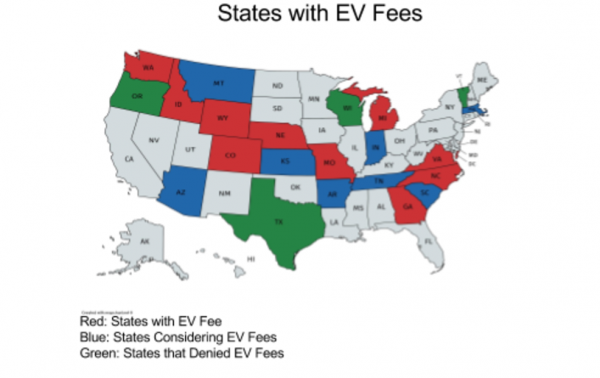 States across the U.S. have been introducing legislation that would punish people for switching to electric vehicles. Since the start of 2017, six states (Indiana, South Carolina, Kansas, Tennessee, New Hampshire, and Montana) have introduced legislation that would require EV owners to pay a fee of up to $180 a year.

Sadly, this isn’t the first time people have been penalized for driving green. Wyoming, Colorado, Virginia, Nebraska, Missouri, Washington, North Carolina, Idaho, Georgia, and Michigan have all implemented yearly fees on electric and hybrid vehicles that vary from $50 to $300 per driver per year. Arizona’s and Arkansas’ respective Department of Transportations are also suggesting legislators cast a fee for EV ownership. Georgia, formerly the state with the second most EV sales, used to offer a tax credit of up to $5,000, but replaced the program with a $200 yearly fee that led to an 80 percent drop in EV sales.

This attack is coming at a time when EVs are just starting to take off within the larger auto industry—and it’s likely no coincidence this attack is coming now. Reportedly, for more than a year, Koch Industries has spent nearly $10 million dollars, and plans to do so every year, on a campaign to boost petroleum-based transportation fuels and attack government support for electric vehicles. This campaign was presumably created because of the risk EVs place on the oil and coal industry. American Legislative Exchange Council (ALEC), a right-wing state legislation machine funded by the Koch brothers and several other multinational corporations, introduced in December of 2015 a resolution to discourage states from providing subsidies for EVs at their States and Nation Policy Summit.

When oil tycoons consider a rise in EV drivers to be a threat to their wallets, you know EVs are taking off. They’re right to be scared—between 2015 and 2016, U.S. electric vehicle sales jumped an impressive 37 percent. According to The Guardian, by 2020 the prices of electric vehicles are expected to fall, which will cause a significant reduction in the demand for oil. A study done by the Grantham Institute for Imperial College London and the Carbon Tracker Initiative found that EVs will account for approximately 35 percent of the road transport market by 2035. They predict that by 2050, EVs will account for more than two-thirds of the road transport market, where they could displace 25m barrels of oil per day.

The proponents of these EV fee bills argue that EVs are causing a drop in gas tax revenue. The gasoline tax was created in 1957 to create funding streams for projects such as roads, transit, and bridges. But the tax hasn’t risen with inflation since 1993, so the revenue covers only a little more than 40 percent of project costs, causing states to search for their lost revenue. But, EVs aren’t the correct source to replace this lost funding. Composing just a tiny slice U.S. auto sales, it is more fuel efficient conventional vehicles that account for a much bigger loss in gas tax funds.

A gas tax, as currently implemented, is an outdated revenue source for funding transportation infrastructure. Multiple states have proposed and even developed ways to modernize funding sources for funding public road services, transit, and other projects.

Some states have considered a carbon tax, a vehicle miles travelled fee, and vehicle weight fees in order to create modern revenue sources for transportation infrastructure funds. Oregon considered an EV fee of $100 per year back in 2013, but the legislation didn’t succeed. Instead the state created OReGo, an optional road traveled tax that saves conventional gas vehicles money while still encouraging consumers to go electric. Massachusetts and Illinois have also considered vehicle miles traveled tax programs. Wyoming is considering raising registration fees by a vehicle’s weight, something that Washington State has been similarly doing through a fee that changes depending on the weight of the vehicle. Experimenting with these kind of alternatives to the gas tax is a much better approach than penalizing drivers of cleaner cars.

Massachusetts just passed legislation to study if an EV purchasing fee would be financially beneficial enough to compensate for low gas tax revenue. Without having to recreate the wheel, they should look to Vermont’s Department of Transportation’s recently published report that found that until electric vehicles make up at least 15 percent of car purchases, it’s within the state’s best interest to incentivize consumers into buying EVs, not penalize them for doing so.

If you’re opposing an EV fee bill in your state (first of all, thank you!), here are some key points to keep in mind when talking to legislators, allies, and the media:

Cleaner, greener and fun to drive, electric vehicle are, not surprisingly, rising in popularity. We should not let the Koch brothers or Big Oil slow this momentum. If there is an EV fee proposed in your state, please reach out to Sierra Club’s Mary Lunetta (mary.lunetta@sierraclub.org) for materials on how to fight back.