Posted by GreenDog on Thursday, 07 October 2021 in Oil Spill 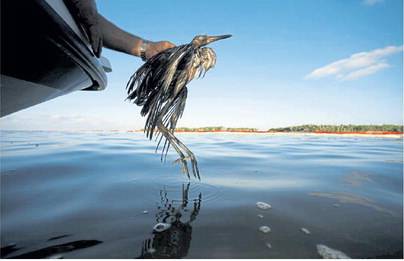 By Blacki Migliozzi and Hiroko Tabuchi

Ever since a pipeline failure caused at least 126,000 gallons of oil to spill into the Pacific Ocean, threatening a fragile coastal ecosystem and forcing some of Southern California’s most popular beaches to close, officials at the National Oceanic and Atmospheric Administration have been scrutinizing satellite imagery to track the oil’s spread.

A series of images captures the extent of the spill, showing how tides have carried the slick closer to the coast. Officials have said the spill is the largest off California since 2015, when Refugio State Beach near Santa Barbara was fouled by oil from a pipeline break.

The latest spill, thought to be from a decades-old pipeline that connected three platforms to a pumping station in Long Beach, has brought scrutiny to California’s aging offshore oil and gas infrastructure. Some of the oldest platforms still in place were installed in the late 1960s. The episode has raised questions about the speed of response: Local residents had started to complain about the smell of oil before state authorities raised the alarm.

California has not allowed drilling off its coast for decades, and the federal government long ago halted offshore lease sales off the Pacific Coast. But the platforms near the recent leak, installed in the early 1980s by a consortium led by Royal Dutch Shell, are still operated by the troubled energy company Amplify, which is based in Houston.

“When you’re talking about platforms that have been in place for 30 or 40 years, there’s going to be wear and tear,” said John B. Smith, an independent consultant who previously managed offshore oil and gas development along the Pacific Coast at the Bureau of Ocean Energy Management. “Over time, the risk of spills goes up.”

Martyn Willsher, Amplify’s CEO, said Monday that the company believed it had identified the location of the pipeline rupture. He also pointed to another possible cause of the leak: A ship’s anchor might have hit the pipeline.

Satellite images from the day before the leak’s first sighting show a large number of ships in the vicinity of the Amplify pipeline. Global supply chain problems, triggered by a jump in consumer spending as pandemic restrictions start to ease, have meant a record number of cargo ships are waiting off the California coast.

Even as the cause of the leak remains unclear, the damage could have significant consequences for the future of the offshore oil and gas industry off California, once a major oil-producing state. The spill has prompted fresh calls for a permanent end to offshore oil production and for the decommissioning of the 200 miles of pipelines that serve 23 offshore platforms that dot the Pacific Coast, all of them many decades old. Eleven of those platforms no longer produce oil or gas, while five of those inactive platforms are in the early stages of decommissioning. The fate of the six other inactive platforms remains unclear as former owners squabble over who is responsible for the millions of dollars it will take to decommission them.

Smith, the former Bureau of Ocean Energy Management official, said that many of the remaining platforms are likely to be decommissioned by the middle of the next decade. California, which has contended with worsening drought and wildfires in recent years, has set some of the most aggressive climate targets in the country, with legislation requiring the state to get 60% of all its electricity from renewable sources by 2030 and 100% from renewables by 2045.

The Biden administration is reviewing practices for decommissioning these towering platforms, a mammoth task; the largest platform is the size of the Empire State Building. Some scientific studies have shown that it may be less ecologically damaging to leave the base of platforms on the ocean floor, where nature can take over, converting the structures into artificial reefs.

California, with just a fraction of the offshore oil and gas infrastructure as the Gulf of Mexico, could be a harbinger of things to come.

In the Gulf, leaks frequently spring from a tangle of more than 8,600 miles of pipelines, many of them abandoned, and more than 1,800 platforms. NOAA spotted dozens of spills after Hurricane Ida.

Miyoko Sakashita, oceans program director at the Center for Biological Diversity, an environmental law group, called the California spill “devastating to Southern California wildlife.” And she said that without stronger oversight, the aging structures would continue to pose grave risks. “These platforms were built 40 years ago, and they’ve been in the wind and the harsh conditions out at sea; they’re time bombs waiting to go off, for an oil spill like this to occur.”