Posted by EarthAction on Friday, 17 February 2012 in Agriculture

Spreading the Word on Biochar 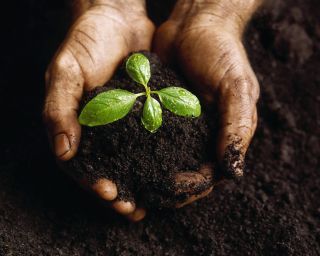 What if there existed a material that could help solve world hunger, fight climate change, and offer a solution for energy shortages to boot? Recent studies on biochar say that it may be just the product, and here’s the kicker: it has been around for at least 2,000 years. It is a solid material produced from the carbonization of organic waste. Extremely high in carbon content, its uses range from replenishing exhausted soil to sequestering excess CO2 out of the atmosphere. Recent discoveries into its uses, both locally and globally, have shown it to be a viable material for an environmentally sustainable future.

Biochar is essentially charcoal, produced when biomass is heated in a low oxygen environment in a pyrolysis process. This process takes dry biomass and heats it at extreme temperatures and at a very low oxygen level. It is very similar to what happens naturally to soil that has been exposed to forest fires: the charred remains are more healthy and nutrient rich. Of the total amount of carbon that goes into the pyrolysis process, half goes into an energy carrying system that can be generated into biofuel. The other half of the carbon is fixed in biochar: a charcoal-like material that can be used as fertilizer to help increase crop yields, prevent run-off of nutrients and fertilizers, retain moisture in the soil and replenish exhausted soils with organic carbon.

The carbon infused in the biochar is stable for millennia. Research has shown that these charcoal particles have the potential to retain their carbon content for hundreds to thousands of years; the only other material- organic or inorganic- that could potentially provide a more permanent carbon storage are diamonds. This means that biochar offers a semi-permanent solution for sequestering excess carbon dioxide out of the atmosphere. It is carbon-negative, meaning that, unlike plants that take in CO2, and then release it through natural processes, biochar retains its carbon in the soil. It is also quantifiable, allowing scientists to measure the carbon that is taken out of the atmosphere through the pyrolysis process.

Recent pioneering efforts in biochar production are paving the way for permanent climate change solutions and agricultural sustainability. On the local level, biochar is most recently being incorporated into farms in Western Kenya.Re:Char, an organization founded by research scientist Jason Aramburu, is helping to supply Kenyan farmers with kilns that will produce biochar. They are hoping to replace their current fertilizers which are both harming the surrounding environment and depleting the soil of important minerals. The results of testing on the use of biochar as a replacement for fertilizer have shown crop yields are consistently higher when the soil is supplemented with biochar alone. Click here to learn more about increased soil fertility from biochar.

On the global sequestering front, a new biomass pyrolysis company is building a pilot plant in Southwest Oregon. The company, Three Dimensional Timberlands(3DT) is taking over a former timber mill site and converting it into a three-ton-per-hour fast pyrolysis unit. Their goals are not strictly for combating climate change; they are also using the plant to produce bio-oil and transport the biochar to high-need agricultural areas. On the local level, they are protecting the surrounding timberlands. The company’s founder, Paul Smith, focuses only on using logging and milling byproducts, materials that are considered low grade of paper mill pulp.

Large concentrations of biochar still exist in Amazonian soil, left behind by Pre-Columbian Indians thousands of years ago. It was only rediscovered roughly 40 years ago and in the last 10 years new interest has sparked research into what biochar can achieve. Today, its uses are more pertinent than ever, with worries about excess CO2 in the atmosphere and the dangers of infertile soil. The recognition of biochar as a powerful and simple tool to fight climate change is making strides. The International Biochar Initiative (IBI) is working to gain international recognition by the United National Framework Convention on Climate Change (UNFCCC) at the post-2012 convention. On the national level, the IBI is working to establish standardized testing and classification systems for biochar production.

Biochar’s ability to substantially affect global climate change is yet to be proven, however, its positive effects on soil fertility and crop yields is enough to consider it as an impressive material. To find out more, or to get involved, refer to the resources section below.

For information on the production of biochar click here.