Posted by grant on Wednesday, 08 August 2012 in General Environment

Three large explosions from the Sun over the past few days have prompted U.S. government scientists to caution users of satellite, telecommunications and electric equipment to prepare for possible disruptions over the next few days. 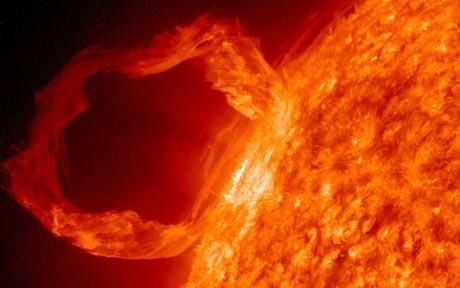 "The magnetic storm that is soon to develop probably will be in the moderate to strong level," said Joseph Kunches, a space weather scientist at the Space Weather Prediction Center, a division of the U.S. National Oceanic and Atmospheric Administration (NOAA).

He said solar storms this week could affect communications and global positioning system (GPS) satellites and might even produce an aurora visible as far south as Minnesota and Wisconsin.

An aurora, called aurora borealis or the northern lights in northern latitudes, is a natural light display in the sky in the Arctic and Antarctic regions caused by the collision of energetic charged particles with atoms in the high altitude atmosphere.

Major disruptions from solar activity are rare but have had serious impacts in the past.

In 1989, a solar storm took down the power grid in Quebec, Canada, leaving about six million people without power for several hours.

The largest solar storm ever recorded was in 1859 when communications infrastructure was limited to telegraphs.

The 1859 solar storm hit telegraph offices around the world and caused a giant aurora visible as far south as the Caribbean Islands.

Some telegraph operators reported electric shocks. Papers caught fire. And many telegraph systems continued to send and receive signals even after operators disconnected batteries, NOAA said on its website.

A storm of similar magnitude today could cause up to $2 trillion in damage globally, according to a 2008 report by the National Research Council.

"I don't think this week's solar storms will be anywhere near that. This will be a two or three out of five on the NOAA Space Weather Scale," said Kunches.