Today is World Water Day - a day to celebrate and become ever more savvy about this incredibly finite resource that we all have to have access to in order to survive. Annie Leonard and crew are also on their game today, releasing a new "Story of..." video, this time on bottled water. The 7-minute animated ﬁlm The Story of Bottled Water , debunks myths and clarifies just what kind of strategy goes into conning Americans into buying more than half a billion bottles of water every week, when it's a fraction of the cost if you just go to your faucet. 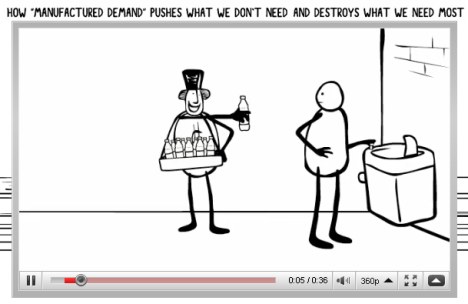 Fortunately, more people are becoming aware about how ridiculous it is to buy plastic bottled water. A Harris Poll found that 29% of the people surveyed switched back to the tap this year. That's a great sign. But it doesn't stop at just the average consumer. It also has to happen in restaurants, at conferences and events, and even among government bodies.

"Cities and states are spending hundreds of millions of taxpayer dollars on bottled water, and that's not to mention what's spent to deal with all the plastic bottles that are thrown out," said Leslie Samuelrich of Corporate Accountability International. "It sends the wrong message about the quality of the tap. What if we instead spent that money supporting public water systems or preventing water pollution in the ﬁrst place?"

And it's not only the US who is guilty of such a bad habit. Just last summer we noted that the BBC is spending about $670,000 a year. Not only does the BBC spend nearly half a million pounds a year on bottled water for coolers, it also spends an undisclosed amount on bottled water for hospitality events - of which it held 103,000 last year alone - and staffers are allowed to order bottled water for any meetings lasting longer than two hours. That's a lot of bottled water!

"Bottled water usage is in decline in the United States for the ﬁrst time in three decades, thanks in part to the hard work of our partners on this ﬁlm. We hope this ﬁlm helps to drive the ﬁnal nail in this huge rip off," said Annie Leonard.