Posted by Angel on Thursday, 23 August 2012 in Forestry

Saving the Forest When Fires Burn 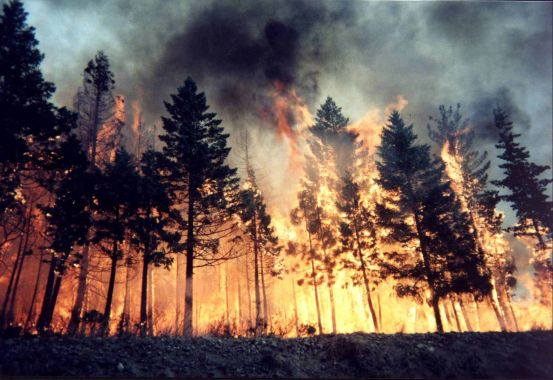 In the 1990s, life was simpler for environmentalists.  Crippling the logging industry was all that was needed to protect trees and birds.

But, as in abortion or gun control, you have to sue everyone or you can sue no one and even responsible logging and clearing brush was stopped by environmental lawsuits and as a result, wildfires have become far more frequent and far more devastating.  Now add a new wrinkle - no logging is leading to more global warming.

Trees remove and sequester carbon from the atmosphere, in the form of carbon dioxide, acting as important stores, or "sinks," of carbon that help to offset its accumulation in the atmosphere. When trees and other woody material in the forest are burned by fire, they release carbon back to the atmosphere, mostly as carbon dioxide, where it may once again act as a greenhouse gas that promotes warming. This land-atmosphere exchange of carbon is increasingly of interest to land managers seeking ways to actively manage forests to store carbon and help mitigate greenhouse gases. Forests in the Pacific Northwest store more carbon than any other region in the United States, but a new study conducted by the U.S. Forest Service's Pacific Northwest Research Station and the Climate Impacts Group at the University of Washington has found that, by 2040, parts of Washington State could lose as much as a third of their carbon stores, as an increasing area of the state's forests is projected to be burned by wildfire. The study used statistical models and publicly available Forest Inventory and Analysis data to estimate the effects of wildfires on carbon storage and fluxes on Washington's forests.

"When considering the use of forests to store carbon, it will be critical to consider the increasing risk of wildfire," said Crystal Raymond, a research biologist based at the station's Pacific Wildland Fire Sciences Laboratory and lead author of the study. To explore what effect wildfires might have on the ability of Washington's forests to act as carbon sinks, Raymond and station research ecologist Don McKenzie combined published forest-inventory data, fire-history data, and statistical models of area burned to estimate historical and future carbon carrying capacity of three regions in Washington — the Western Cascades, the Eastern Cascades, and the Okanogan Highlands — based on potential forest productivity and projections of 21st century area burned.

The researchers looked at live biomass, which includes living trees and vegetation, as well as nonliving biomass in the form of coarse woody debris, which includes dead standing trees and downed logs. Both contribute to the carbon cycle but living biomass removes carbon from the atmosphere as vegetation grows and coarse woody debris releases carbon over time as the material decomposes.  Both are obviously impacted by fires.

Raymond and McKenzie projected forests of the Western Cascades to be most sensitive to climate-driven increases in fire, losing anywhere from 24 to 37 percent of their live biomass and from 15 to 25 percent of their coarse woody debris biomass by 2040. These forests store significant carbon and typically burn with high severity, killing many trees and consuming coarse woody debris.

On the other side of the mountains, the researchers also projected a decrease in live biomass by 2040, of anywhere between 17 and 26 percent in the Eastern Cascades and in the Okanogan Highlands, but no change in coarse woody debris biomass, or possibly even an increase, because coarse woody debris biomass increases as trees are killed by fire and subsequent low-severity fires burn only a small portion of it.

Understanding the possible effects of more area burned by fire can help managers decide whether forests need to be actively managed for their fire potential to minimize carbon loss.