Posted by katysai on Wednesday, 06 February 2013 in Wildlife Conservation

Religious Leaders Stand Up For Elephants 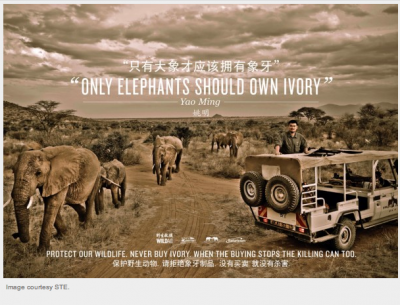 WASHINGTON – Elephant poaching and ivory smuggling in Africa are at their highest levels in more than a decade, according to a 2012 report from the Convention on International Trade in Endangered Species of Wild Fauna and Flora (CITES).

The illegal trade in ivory, fueled in part by demand in Asia for ivory-made religious products, threatens the survival of elephant populations across the African continent.

In a statement on the use of ivory for religious objects, the Society for Conservation Biology (SCB) has called for conservation biologists to work closely with religious leaders in Asia to raise awareness of the ethical and ecological issues behind the trade in ivory, and engage them in discussing the use of substitute materials that are most readily available and sustainable from both environmental as well as religious perspectives.

In an October 2012 cover story on “blood ivory”, National Geographic magazine shed light on the link between religion and the ivory trade, which involves the brutal removal of ivory from African elephants and the subsequent sale of ivory products such as religious artifacts and trinkets in Asia. Those who use the products for worship or other religious purposes are often unaware of the link between the decline of the African elephant and the ivory trade.

“SCB is concerned at the alarming rate at which elephants are dying as a result of illegal poaching activities to supply the ivory trade,” said conservation biologist Stephen M. Awoyemi, a member of SCB’s Religion and Conservation Biology Working Group. “Their decline is also problematic for their habitats in which they serve as ecosystem engineers and key seed dispersers. Population decline from the killing of elephants and other large animals will impact the long-term prospects for forest regeneration and healthy ecosystems,” he added.

African elephants are listed as “Vulnerable” to extinction by the International Union for Conservation of Nature. If poaching continues unabated, scientists predict that the African elephant could be driven to extinction across most of its range by 2020. Researchers have estimated that the continent’s remaining 470,000 elephants are declining at an annual rate of eight percent.

The ivory trade involves violence against elephants and the people that protect them, disrupts social harmony, and threatens the livelihoods of local communities.

“The malevolence of the ivory trade violates the principles and values of good stewardship and respect for all life, which is the foundation of all global religions,” Awoyemi said. “Furthermore, the demand for ivory in Asia lies in contradiction to the respect bestowed specifically on the elephant in Asian culture. The Asian elephant is closely related to the African elephant and is a national symbol of Thailand.”

SCB is encouraged that religious leaders and groups have spoken against ivory smuggling and the brutal massacre of the African elephant. The Religion and Conservation Research Collaborative (RCRC), part of SCB’s Religion and Conservation Biology Working Group, has reached out to Buddhist and Catholic religious leaders in Asia to encourage them to positively influence the survival of the African elephant.

The Society for Conservation Biology is an international professional organization dedicated to promoting the scientific study of the phenomena that affect the maintenance, loss, and restoration of biological diversity.