Posted by lillianbarbeito on Tuesday, 12 March 2013 in Climate Change 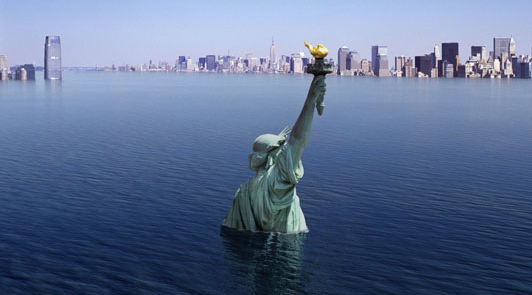 Whew! We made it through that Mayan end of the world apocalypse thing. But don’t even begin to imagine that our doomsday problems are nearly over.

To be more specific, the article discusses a study published in the journal Science states that higher temperatures over the past two decades have contributed to a nearly half-inch rise in global sea levels since 1992, attributing about 30% of that increase to melting of polar ice sheets. The study estimates that roughly half of that 0.43 inch rise was caused by thermal expansion of the oceans (as water warms, it becomes less dense and expands), some from from runoff from melting glaciers, and the rest from melting of Greenland and Antarctica ice sheets.

And by the way, it also points out that Greenland has been a bigger contributor to all of that because Northern Hemisphere ocean currents are warmer (yup, it’s called the” North Atlantic Oscillation”…a natural cycle that shifts about every 60-70 years), while “Antarctica is so cold that even if warming occurs it won’t melt” at the rate seen in Greenland (according to the study co-author). The study also admitted that it’s a tricky question whether or not the overall accelerated melting of polar ice sheets can be linked to man-made climate change influences; that current climate-change models predict that some parts of the Antarctic ice sheets will grow, while others will melt; that Antarctica is not losing ice as rapidly as suggested by many recent studies; and that “The signals suggest there is no immediate threat” from rising sea levels.

What a relief!  I was really worried there for a minute.

In fact, another recent study posted in Science, concluded that polar ice sheet melting has been massively overestimated. That analysis is based upon new methods that filter out “noise” from “Gravity Recovery And Climate Experiment” (GRACE) satellite data. As researcher Frederik Simons of Princeton explains, “Our technique learns enough about the noise to effectively recover the signal, and at much finer spatial scales than was possible before.”

Simons and his colleague Christopher Haig directed particular attention to the Greenland ice sheet, noting that the Antarctic ice cap is actually getting bigger. While they found that Greenland’s ice loss did consistently increase between 2003 and 2010, the change was very patchy from region to region. In addition, the enhanced detail of where and how much ice melted allowed them to estimate that the annual loss acceleration was much lower than previous research suggested, roughly increasing by 8 billion tons annually, Previous estimates were as high as 30 billion tons more per year.

Such rates of Greenland ice loss were barely larger than the margin of error in their readings, making it difficult to discern any difference between a supposed loss curve on a graph from a straight line. At the current rate, it will cause sea levels to rise about 2.4 inches over the next century.  And according to the authors: “At current melt rates, the Greenland ice sheet would take about 13,000 years to melt completely, which would result in a global sea level rise of more than 21 feet (6.5 meters).”

The good news is that we are scheduled for the next Ice Age long before that. It should give Al Gore at least some comfort knowing that.

Sure, but even if Greenland and Antarctica melting is on ice for a while, what about that dreaded sea level-hiking runoff from those glaciers? After all, according to the EPA and the UN’s Intergovernmental Panel on Climate Change (IPCC), the main factors driving sea level changes now  are: “the expansion of ocean water caused by warmer ocean temperatures, melting of mountain glaciers and small ice caps, and (to a lesser extent) melting of the Greenland Ice Sheet and the Antarctic Ice Sheet.”

Besides, we all knew there was a big crisis after the IPCC warned us that the Himalayan glaciers might disappear altogether by the year 2035, leading to flooding of rivers followed by imminent drought and starvation for billions of people. Well, okay, it later turned out that they made this all up, but never-the-less, those glaciers must be melting pretty fast, or they wouldn’t have worried their Nobel Peace Prize- awarded minds and have scared us all to death about it…would they?

Darn! Maybe we all might have gotten a lot more sleep had we known about recent results of another GRACE satellite study published in the journal Nature that shows that Himalayan glaciers are hardly melting at all. According to John Wahr at the University of Colorado-Boulder, glaciers and ice caps in places other than Greenland and Antarctica lost about 30% less ice than had previously been estimated.

Wahr expressed surprise at these findings, saying: “One possible explanation is that previous estimates were based on measurements taken primarily from some of the lower, more accessible glaciers in Asia and were extrapolated to infer behavior of higher glaciers. But unlike the lower glaciers, many of the high glaciers would still be too cold to lose mass even in the presence of atmospheric warming.”

Not only that, it appears that glaciers in the high Asian mountain ranges…the Himalayas, the Pamir and the Tien Shan…were even  much better off (presuming they really care). Previous estimates suggesting depletion rates as high as 50 billion tons of ice per year were exaggerated by a plus-or-minus 20 billion ton error.

And what about those sea levels?  Are they rising at a terrifying rate?  Although the UN’s IPCC, based upon its highly theoretical climate models have predicted an increase in the rate of global average sea level rise during the 20thcentury, that rate has actually been rather stable, with no significant rise over the past 50 years. The rates in the 1920-1945 period were likely to have been just as large as today’s.

So please, someone, tell Al Gore that maybe it’s time to relax. When co-anchor Katie Couric asked him on the May 24, 2006 Today show “What do you see happening in 15 to 20 years if nothing changes?…Even Manhattan would be in deep water”, he replied: “Yes, in fact the World Trade Center Memorial site would be underwater.” Then, much more recently when hurricane Sandy blew in, he knew exactly what to blame. Us of course…due to our coal-fired-electricity-powered laptop computers, fossil-fueled-climate-ravaging SUVs, and a host of other tide-raising influences. Wouldn’t you think that informing him about this recent research would make him feel a lot better, knowing that his new $9 million ocean-view villa in Montecito, California is safe?