Posted by thatsenough on Monday, 12 August 2013 in Animals

Smart, Social and Erratic in Captivity 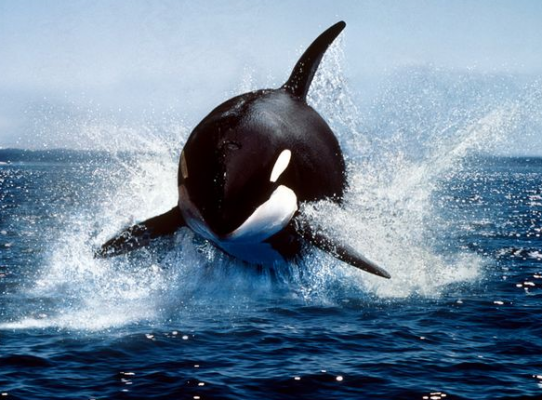 Should some of the most social, intelligent and charismatic animals on the planet be kept in captivity by human beings?

That is a question asked more frequently than ever by both scientists and animal welfare advocates, sometimes about close human cousins like chimpanzees and other great apes, but also about another animal that is remarkable for its intelligence and complex social organization — the killer whale, or orca.

Killer whales, found in all the world’s oceans, were once as despised as wolves. But in the last half century these elegant black-and-white predators — a threat to seals and other prey as they cruise the oceans, but often friendly to humans in the wild — have joined the pantheon of adored wildlife, along with the familiar polar bears, elephants and lions.

With life spans that approach those of humans, orcas have strong family bonds, elaborate vocal communication and cooperative hunting strategies. And their beauty and power, combined with a willingness to work with humans, have made them legendary performers at marine parks since they were first captured and exhibited in the 1960s. They are no longer taken from the wild as young to be raised and trained, but are bred in captivity in the United States for public display at marine parks.

Some scientists and activists have argued for years against keeping them in artificial enclosures and training them for exhibition. They argue for more natural settings, like enclosed sea pens, as well as an end to captive breeding and to the orcas’ use in what opponents call entertainment and marine parks call education.

Now the issue has been raised with new intensity in the documentary film “Blackfish” and the book “Death at SeaWorld,” by David Kirby, just released in paperback.

The film and book both focus on the 2010 death of Dawn Brancheau, a trainer, at SeaWorld in Orlando, Fla. She was dragged underwater by a whale called Tilikum, who had been involved in two earlier deaths.

The event led to two citations for safety violations by the Occupational Safety and Health Administration for an unsafe workplace, and an ongoing struggle over OSHA requirements that trainers be separated from killer whales. The most recent fine was in June, and SeaWorld is appealing both decisions.

Both the book and film argue that Tilikum’s actions were deliberate and that his behavior was a result of the psychological damage of captivity, not just at SeaWorld but also at another facility where he was first kept. SeaWorld has said the death was an accident, not a deliberate killing.

Beyond the death of Ms. Brancheau and the arguments over how SeaWorld manages its many facilities lies a fundamental disagreement about whether killer whales, and other cetaceans — the group of marine mammals that includes whales, dolphins and porpoises — should be held captive at all.

It is reminiscent in many ways of the movement to put all captive chimpanzees into sanctuaries, which recently scored two major successes when the National Institutes of Health decided to retire most of its chimpanzees and the Fish and Wildlife Service proposed listing all chimps as endangered, raising new barriers to experimentation.

But the situation for killer whales is different. There are many fewer in captivity — a total of 45 worldwide, according to the organization Whale and Dolphin Conservation — and thousands of people have come to love them partly because of the very exhibitions in marine parks like SeaWorld that disturb those who oppose keeping the whales in captivity. A great deal of scientific study of marine mammals has also been done in these marine parks.

But even some scientists who have worked with captive dolphins set orcas apart because of their size, their range of movement in the wild, and the close-knit nature of their social groups.

Diana Reiss of Hunter College, who has studied self-recognition in captive dolphins and who was not involved in the making of “Blackfish,” said that the question of whether animals like bottlenose dolphins should be kept in captivity is important and should be discussed.

But, Dr. Reiss said, she does not see ambiguity about killer whales. “I never felt that we should have orcas in captivity,” she said. “I think morally, as well as scientifically, it’s wrong.”

The animal in question, Orcinus orca, is actually the largest dolphin. Its name apparently came not because it was a vicious whale, but because it preyed on whales.

The species as a whole has a varied diet, with some groups specializing in fish eating, and others concentrating on seals. They have been known to eat penguins and other seabirds, occasionally squid and turtles, even a swimming moose or deer.

The males can reach 32 feet long and weigh up to 22,000 pounds. The females are smaller, up to 16,500 pounds, but live longer. While males average about 30 years and may reach 60, females normally live about 50 years but can reach 90. They live in family groups or pods, typically ranging from a couple of animals to 15, although they may temporarily join in groups of 200 or more.

They exist around the world, and subgroups differ in diets, behaviors and physical traits. One subgroup in the Pacific Northwest, called the Southern Resident population, is listed as endangered under the U.S. Endangered Species Act.

Orcas can travel great distances. “They can go 100 miles in a day,” said Lori Marino, an Emory University researcher who worked with Dr. Reiss and an activist, who appears in “Blackfish” and opposes keeping dolphins and orcas in marine parks.

Killer whales have complex brains, and the behaviors of different groups are so diverse that scientists talk about them as having different cultures.

The opposition to keeping them in captivity is based partly on evidence that they are smart, social and wide ranging. Those facts are not really disputed, nor is the principle that humans owe the orcas now in captivity a good life.

Opponents of captivity cite a number of physical and psychological problems, including repetitive behaviors, dental issues and attacks on trainers, like the one on Ms. Brancheau.

Yet opponents of captivity recognize that the animals, for their own safety, cannot simply be released into the wild, and so are not calling for SeaWorld or other marine parks to close. Rather, they say, they would like to see the parks keep the orcas in larger, more natural settings, something like sea pens — inshore areas of ocean that can be closed in by nets.

Naomi Rose, a whale biologist who is moving from the Humane Society of the United States to the Animal Welfare Institute, was a co-author of a Humane Society paper in 2011 opposing the keeping of orcas in captivity. She said creating sanctuaries for orcas is “highly feasible,” and could and should be done by companies like SeaWorld, which has 22 orcas, nearly half of the total in captivity.

Merlin Entertainment, which owns amusement parks like Legoland and some Sea Lifeaquariums, mostly in Europe, has been exploring the possibility of a sanctuary for bottlenose dolphins with Whale and Dolphin Conservation. Cathy Williamson, the captivity program manager for the organization, said it had been “quite tricky” finding a location in Europe where a large natural area, a cove or bay, could be enclosed. Yet, she said, it is feasible to create “a very large netted area, so they’re still in captivity, but they wouldn’t be performing tricks for tourists.” The same kind of sanctuary could also work for orcas, she said.

But both SeaWorld and the Association of Zoos and Aquariums say that such sanctuaries would be a solution for a problem that does not exist. The association has 222 members, 212 in the United States, including the SeaWorld parks in Orlando, San Antonio and San Diego.

The organization sets accreditation standards with requirements for the physical, social and psychological well-being of the animals. “That would be true for an orca, a tiger and a chimpanzee,” said Steven Feldman, a spokesman.

But while the organization opposes the use of chimpanzees for entertainment, and joined in petitioning the Fish and Wildlife Service to declare captive chimpanzees endangered, it considers the jumps, dives and other behaviors that killer whales and other marine mammals exhibit at marine parks to be in the nature of education rather than pure entertainment.

Christopher Dold, vice president of veterinary services at SeaWorld, argues that orcas at SeaWorld facilities already have “a phenomenal quality of life.” SeaWorld and the Association of Zoos and Aquariums say that SeaWorld offers a high level of veterinary care and psychological enrichment programs for the captive animals.

They also say that research is being done there on cognition, behavior and the physiology of killer whales and other cetaceans that could not be done any other way. That knowledge, and the chance for the public to see the animals in action, Dr. Dold said, can educate the public and support the cause of conservation.

“That’s why killer whales that connect with people in zoos every day are so important to us as a society,” he said.

Dr. Rose, the opponent of keeping orcas in captivity, also points out that much of the science began in marine park studies. “The history is that our science is built on the backs of people who got their start in the public display industry,” she said, adding, “It’s an issue that our community doesn’t like to grapple with” — one that she hopes to remedy.

At a meeting in New Zealand of the Society for Marine Mammology, Dr. Rose will be one of several co-authors presenting a paper about survival of captive orcas. She said it shows that captive orcas do not do as well as wild ones, and that changes in the care of the animals and an increase in the percentage of captive-born animals since 1995 have not improved survival rates.

The scientific community, she said, has some “hard truths” it needs to confront.