Posted by stringer on Wednesday, 14 August 2013 in Ocean/Seas/Coastlines 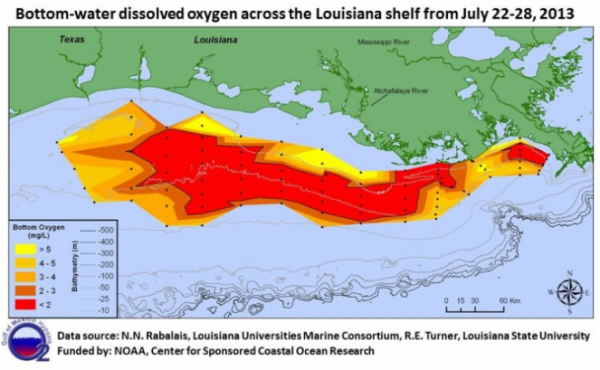 Scientists have located this year's dead zone in the Gulf of Mexico, which is surrounded by the North American continent and the island of Cuba. Though the dead zone is big, it not as large as predicted earlier. Water drained from the Mississippi river into the Gulf is a major factor.

Hypoxic (oxygen free) dead zones are a result of nutrient runoffs from agricultural or other human activities. These nutrients fuel the overgrowth of algae that sinks, decomposes and takes in maximum of the oxygen that is required to support life. Generally such dead zones are spotted in areas that are closer to the Gulf floor as the decaying algae settles at the bottom.

This year several areas were seen by scientists across the Gulf where oxygen levels at the bottom were extremely low. Because of this those animals that generally stay closer to the seabed were seen swimming at the surface.

The large dead zone spotted in the Gulf of Mexico measures 5,840 square miles, roughly the size of Connecticut. It is believed that the nutrients from the Mississippi River watershed continue to affect the nation's commercial as well as recreational marine resources in the Gulf.

Earlier NOAA sponsored forecast models  predicted that the  size of the Gulf hypoxic zone would range from  7,286 to 8,561 square miles.

"A near-record area was expected because of wet spring conditions in the Mississippi watershed and the resultant high river flows which deliver large amounts of nutrients. But nature's wind-mixing events and winds forcing the mass of low oxygen water towards the east resulted in a slightly above average bottom footprint," Nancy Rabalais, Ph.D. executive director of the Louisiana Universities Marine Consortium (LUMCON), said in a press statement.

"For those who depend upon and enjoy the abundant natural resources of the Gulf of Mexico, it is imperative that we intensify our efforts to reduce nutrient pollution before the ecosystem degrades any further," said Robert Magnien, Ph.D., director of NOAA's Center for Sponsored Coastal Ocean Research.

The dead zones that are formed off the coast of Louisiana and Texas each summer threaten the ecosystem. A report from the Gulf Task Force in 2008 stated that hypoxia has a negative impact on the marine resources. The living resources present in the Gulf exhibit a long term ecological variation in species diversity and a large scale change in the food web that cannot be reversed. As a result of hypoxia, fish kills occur on a large scale in areas of the Gulf.

The team plans a follow up cruise in mid August to get a clear picture of this summer's dead zone and to give a final season update.