Posted by miguel on Wednesday, 14 August 2013 in Lakes/Rivers/Wetlands 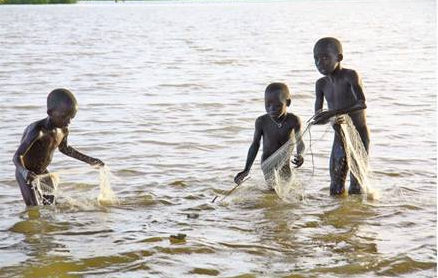 Mopti — At the noisy market in Mali's central city of Mopti, 49-year-old Alimatou Maiga complains about how hard it is to find big fish for sale these days.

Extracting a dried fish from a dish full of others, Maiga said supplies have become less plentiful even though the region is Mali's main source of fish. "When I started selling fish in 1984, there was enough fish in the river and the fish trade was profitable," she said.

Maiga and her female colleagues get their fish from the flood plains of the Inner Niger Delta, a 30,000 square km wetland in central Mali's semi-arid Sahel belt. "Now things have changed, as the (ethnic) Bozo fishermen who supply us can't catch as much fish as we need," she said.

After the rains start in late June, the Niger River inundates the delta, whose flood plains lie below sea level. It is normally covered with floodwater from June to February, turning it into a network of ponds and lakes interspersed with forest.

The flood forests are a breeding ground for fish, which local people catch and sell. Farmers also grow a natural cattle fodder, the aquatic bourgou grass. The delta has been classified as a wetland of international importance under the Ramsar Convention.

Fishing provides a livelihood for one third of the 1.5 million people who depend on the delta, but its lakes, ponds, forests and rivers are shrinking due to the combined impacts of climate change and economic activities, according to Wetlands International, a Netherlands-based NGO.

The effect of changing climate patterns - especially a decrease in rainfall and its predictability - is exacerbated by upstream water management for agriculture, according to Mory Diallo of the Wetlands International office in Sevare in central Mali.

"All the dams already built on the Niger River upstream in Mali and those planned will divert water from the region. This will enlarge areas unsuitable for fish," said Diallo, adding that a 1 square metre reduction in flooded surface equals a loss of 213 tonnes of fish.

Another problem is poaching of migratory birds, which are sold for food in drought-prone areas. "In winter, millions of migratory birds from Europe and other regions of Africa nest in the region's flooding forests. Fish reproduction almost depends on them, as their excrement enriches the floodwaters where fish reproduce," said Diallo.

Thanks to a joint initiative by Wetlands International and the government, the fish traders in Mopti market have become aware of the urgent need to preserve biodiversity in this endangered region. They no longer sell migratory birds poached by the fishermen, as they used to.

"None of the women working in this market will accept to buy a migratory bird from the fishermen. Now we know that they are important for survival of fish, which are our main source of income," said Ramata Drame, head of an association set up by the women traders.

Wetlands International is supporting them and other local people in their commitment to preserve the delta's eco-system by helping them access credit.

Small loans enable them to pursue other activities that put less pressure on fragile natural resources and improve their resilience to climate change, such as setting up community cereal banks, according to Almoustapha Maiga of the Wetlands International local office.

The project enjoys a 75 percent success rate, according to the NGO. It has been working in the area since the 1980s, but was forced to suspend activities temporarily during the conflict that flared in the West African nation last year, bringing French intervention in January.

This week, Ibrahim Boubacar Keita, an ex-prime minister with a reputation for firmness, won a presidential election after his rival conceded defeat in a poll meant to draw a line under more than a year of turmoil.

Development workers, who restarted their operations in central Mali in June, provide information to local communities about the importance of protecting natural resources. They give villagers tree seedlings to help restore the forest, as well as bourgou seeds, because the fodder plant has been suffering from drought.

The recipients identify the forests and bourgou fields they want to restore. "The channels of the pond we use for fishing in the dry season were filled with sand, and it had got much smaller. We opened the channels with the support of Wetlands," said Mama Konta, a Bozo fisherman from Djene village.

Meanwhile, the women selling fish in Mopti market have got ambitious ideas about how to improve their business. "We need to find a refrigerator to produce ice for the conservation of fresh fish," Maiga said.

Soumaila T. Diarra is a freelance journalist, based in Bamako, Mali.