Posted by rackfokus on Monday, 21 April 2014 in Water Conservation

The Cost of More Water For California 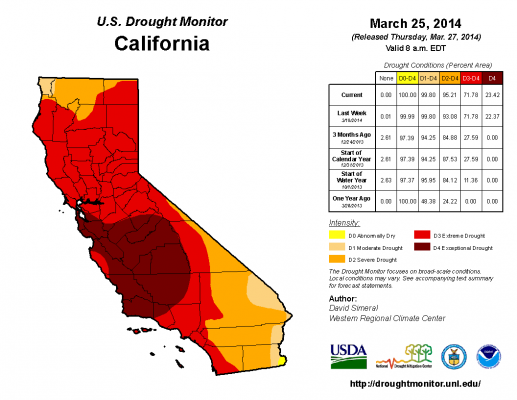 The end of the rainy season is nearly here, and California faces a long, dry summer with a Sierra snowpack that is only 33% of normal. There is no significant precipitation in the forecast for California through April 25, but the state still has another shot at a decent round of heavy precipitation the last few days of April, according the latest long-range forecasts from the GFS model. If this storm does materialize, March and April precipitation would be near average for California, helping offset the November - February period, which was the driest such 3-month period in California's recorded history.The winter rainy season of 2013 - 2014 is going to end up well below average for precipitation, though, and comes on the heels of two other poor rainy seasons, which leaves California in a dire drought situation. The April 15, 2014 Drought Monitor is showing that 99.8% of California is in drought, with 95% of the state in Severe, Extreme, or Exceptional drought.

Figure 1. Predicted precipitation for the 7-day period ending Friday, April 25, 2014. No significant rain capable of easing the drought is expected to fall in California in the coming week. Image credit:NOAA/HPC.

Figure 2. The latest NOAA seasonal drought forecast calls for drought to persist or intensify until the end of July across much of the Southwestern and Western U.S., including all of California and Nevada. Image credit: NOAA/CPC.Ways to Ease California's DroughtThere is only one major river in the Southwest, the Colorado River, and in most years the flow in the river is far less than the amount of water allocated to stockholders drawing water from the great river. Over 30 million people depend on the Colorado River for their water, including much of Southern California, and the river irrigates farmland that produces 15% of the nation's food. Two major studies, one by the U.S. Bureau of Reclamation in 2012, and one by the non-profit Pacific Institute in 2013, laid out five major ways that the Colorado River basin can get more water. As I outlined in Part 1, 2, and 3 of this series over the past month, three ways to get more water for the thirsty Southwest are through:1) Conservation measures2) Cloud seeding 3) Desalinization plantsAnother option is to build more enormous water works programs. California already has a number of massive multi-billion dollar water works programs that shuttle water from water-rich areas to water-poor areas. For example:The $1.75 billion California State Water Project and the federal Central Valley Project, which collect water from rivers in Northern California and redistribute it to Southern California through a network of aqueducts, pumping stations, and power plants. The All-American Canal, which takes water from the Colorado River and supplies California's Imperial Valley. It is the Imperial Valley's only water source.The Colorado River Aqueduct, completed in 1939, which takes water from the Colorado River on the California/Arizona border and pipes it 242 miles to the west into Southern California.

Figure 3. Landsat-8 image of the region just west of Yuma, Arizona, showing several of the major Colorado River canals that have been built to divert the river's water: the All-American Canal, which takes water from the Colorado River and supplies California's Imperial Valley, and the Central Feeder Canal, which supplies Mexico. Image credit: NASA Earth Observatory.However, there really isn't much excess water to be had in the Western U.S. anymore. So, another option might be to pipe water over the Rockies from the Missouri River watershed. A "Missouri River Reuse Project" has been proposed by officials in Colorado and in the U.S. Department of Reclamation. This 30-year, multi-billion dollar project would divert water from the Missouri River across Kansas to the Front Range of the Colorado Rockies, where the water could then be pumped into the headwaters of the Colorado River. The cost of the water delivered would be similar to desalinization, about $2000 per acre-foot. This very high cost has made the project unattractive, and it has also met with opposition from environmental groups. "Huge pipelines aren't solutions to the fundamental problem that we are using more water than we can sustain. You can't build more water," said Drew Beckwith, a water policy manager for Western Resource Advocates, in a 2012 interview with the Denver Post. "We need to work together on conservation and reuse strategies that can have an immediate positive impact."Other massive engineering projects, including building aqueducts to bring water from Washington's Snake and Columbia rivers, a tunnel under the Pacific Ocean to import water from Alaska, towing icebergs to California, or using water bags or tanker vessels to transport water, were deemed much too expensive to be considered practical in the U.S. Bureau of Reclamation study. Their cost was at least 50% more than using desalinized water.