Posted by deanomori on Thursday, 15 May 2014 in General Environment

The Cleanest Place On Earth 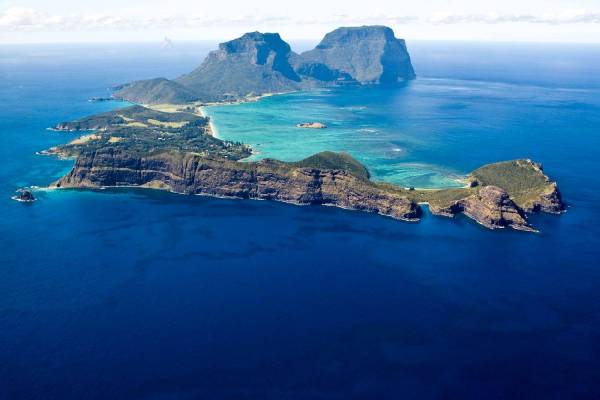 Lord Howe Island is an irregularly crescent-shaped volcanic remnant in the Southwest Pacific Ocean. Two thirds of the island is a Permanent Park Preserve and the surrounding waters a Marine Park since 1998. Lord Howe is one of the "cleanest" places on earth: located 600km from the nearest large land mass, there is no air or sea pollution and no litter. The Lord Howe Island Board and the iIslanders go to considerable lengths to preserve the island, with comprehensive recycling programs; a tourist bed limit; and environmental management plans.

The Lord Howe Island Group of islands comprises 28 islands, islets and rocks. Apart from Lord Howe Island itself the most notable of these is the volcanic and uninhabited Balls Pyramid about 23 km to the south-east, which is sheer, pointed, bird-colonised and (551 metres (1,808 ft)) high. To the north there is the Admiralty Group, a cluster of seven small uninhabited islands. Just off the east coast is Mutton Bird Island, and in the lagoon is Blackburn (Rabbit) Island.

The island's outstanding natural history was recognized in 1982 when the Lord Howe Island Group was recorded by UNESCO as a World Heritage Site of global significance.

Situated in the Tasman Sea between Australia and New Zealand the island is 600 kilometres (370 mi) directly east of mainland Port Macquarie702 kilometres (436 mi) northeast of Sydney, and about 900 kilometres (560 mi) from Norfolk Island to its northeast. The island is about 11 km long and between 2.8 km and 0.6 km wide with an area of 16.56 sq km.

In the south there is two volcanic mountains, Mount Lidgbird (777 metres) and Mount Gower o (875 m), the highest point on the island. In the north, where most of the population live, high points are Malabar (209 metres) and Mount Eliza (147 metres). Between these two uplands is an area of cleared lowland with some farming, the airstrip, and housing.

Most of the island is virtually untouched forest on rugged terrain with many of the plants and animals found nowhere else in the world. Among its many natural attractions are: the diversity and exceptional natural beauty of its landscapes; the wide variety of upper mantle and oceanic basalts; the world's southernmost barrier coral reef; fourteen different nesting seabirds; large numbers of rare and endemic species of plants and animals; and a rich historical and cultural heritage.

The island has over 130 species of bird; the sheltering coral reef hosts over 500 species of fish and 90 different corals. The reef is in pristine condition, washed by the cleanest ocean on the planet. Lord Howe Island has recorded 241 species of indigenous plants of which 113 or 47 per cent are found nowhere else in the world.

Typical of remote oceanic islands, the vertebrate fauna is largely dominated by birds, including the Lord Howe Island Woodhen, which has been the centre of a highly successful captive-breeding program. Fourteen species of seabirds have important breeding populations. Lord Howe Island is reputed to have more seabird species breeding in higher numbers than anywhere else in Australia. There are at least 129 native and introduced bird species. Lord Howe is now the only known breeding ground for providence petrel. Fleshy-footed shearwater breeds in large numbers, with possibly half the world's population present seasonally. Other important species breeding within the preserve include kermadec petrel, black-winged petrel, wedge-tailed shearwater, little shearwater, white-bellied storm petrel, masked booby, and red-tailed tropic bird in greater concentrations than probably anywhere else in the world.

More than 1,600 terrestrial insect species have been recorded with approximately 60 per cent found nowhere else. One of the most spectacular insects is the Lord Howe Island Phasmid, a large stick insect - thought to be extinct, but rediscovered in recent years on Balls Pryamid, a 550 metre high volcanic stack rising from the sea, 23 km from the island.

Almost half of the island's native plants are endemic. The most famous is the Kentia palm, of which there are four species on the island.

A population of the large forest bat occurs on the Island. No other indigenous native mammals are known. Introduced species, however, include mice, rats and goats.

The marine environment of this far-flung part of NSW is utterly unlike any other part Australia, with a variety of tropical and temperate species brought on converging currents, and a large number of plants and animals which occur nowhere else.