Posted by Tiny on Monday, 21 July 2014 in Environmental Heroes

The Pope's Mission To Protect The Earth 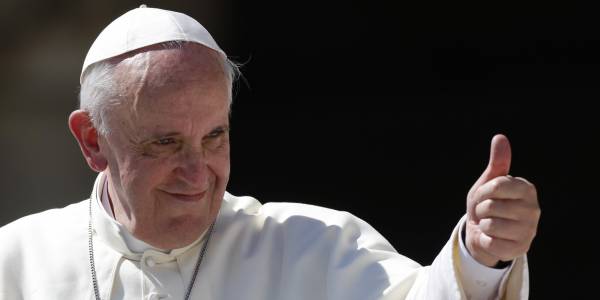 This past weekend, Pope Francis did something that was quietly revolutionary. In a talk at the Italian university of Molise, Francis characterized concerns about the environment as “one of the greatest challenges of our time”—a challenge that is theological, as well as political, in nature. “When I look at ... so many forests, all cut, that have become land … that can [no] longer give life,” he reflected, citing South American forests in particular. “This is our sin,exploiting the Earth. ... This is one of the greatest challenges of our time: to convert ourselves to a type of development that knows how to respect creation.” And the pontiff isn’t stopping there; he’s reportedly planning to issue an encyclical, or papal letter, about man’s relationship with the environment.

It’s easy to be glib about Francis’s remarks—few people see the chopping-down of the Amazonian rainforests as an encouraging development. And a pope championing environmental protection isn’t entirely new; after all, The Guardian dubbed Benedict XVI the “first green pontiff” for his work in this area. But by characterizing the destruction of the environment not merely as asin, but rather as our sin—the major sin, he suggests, of modern times—the pope is doing more than condemning public inaction on environmental issues. By staking out a fiercely pro-environmentalist position, while limiting his discourse about hot-button issues like homosexuality, Francis is using his pulpit to actively shape public discourse about the nature of creation (indeed, environmental issues were part of his first papal mass). In so doing, he is implicitly endorsing a strikingly positive vision of the individual’s relationship with the created world, and with it a profoundly optimistic vision of what it means to be human—and incarnate—overall, opening the door for a radical shift in emphasis, though not doctrine, when it comes to the Catholic Church’s view of mankind.

The Christian view of the individual’s relationship to nature—“creation,” we might call it in a theological context—has traditionally revolved around interpretations of the exhortation in Genesis 1:28: “And God blessed them, and God said unto them, Be fruitful, and multiply, and replenish the earth, and subdue it: and have dominion over the fish of the sea, and over the fowl of the air, and over every living thing that moveth upon the earth.” Many have cited the idea of dominion to justify an anthropocentric view of the world, in which nature exists solely to provide man with its bounty—a position that is often more prevalent in evangelical Protestant circles, especially within the United States. Legislation such as the Louisiana Science Education Act, which seeks to enact a “balanced” (read: climate-change-denying) curriculum on environmental change in schools, has received support from organizations like the creationist think tank the Discovery Institute and the Christian advocacy group Alliance Defending Freedom. The Cornwall Alliance, whose declaration has been signed by luminaries of the religious right, released a 12-part video series in 2010 entitled “Resisting the Green Dragon,” about the dangers of environmentalism. This perspective, however, is hardly limited to Protestants. Consider the Catholic politician Rick Santorum, who at a 2012 energy summit in Colorado rejected the threat of climate change. “We were put on this Earth as creatures of God to have dominion over the Earth, to use it wisely and steward it wisely, but for our benefit not for the Earth’s benefit,” he said.

Such hostile stances on environmentalism are themselves rooted in a far more profound question: To what extent should the self be understood as existing against, or in concordance with, nature? In many Christian traditions, and particularly among the Christian right, the individual and the created world are considered at odds—a product of the expulsion of Adam and Eve from the Garden of Eden, and God’s declaration in Genesis 3:16 that “Cursed is the ground because of you [Adam]; through painful toil you will eat food from it all the days of your life.” The act of original sin, in other words, sets up an inherently combative relationship between man and nature; any conflict is part of “God’s plan.” As G. Elijah Dann, a professor of religion and philosophy at Simon Fraser University in Canada, put it in aHuffington Post article on the evangelical mindset: “To somehow think we can correct climatic instabilities is [seen as] a denial of God’s judgment against human disobedience.” Furthermore, any attempt to ‘fix’ the natural world is an unwelcome effort to shift emphasis from the soul to the body. As Dann writes, “When scientists back in the ’70s were starting to worry about the environment, they were seen as engaging in a secular form of salvation—to save the planet—and, as such, were an affront to God. Emphasis should rather be on the salvation of souls.” The secular and the sacred are, in this worldview, totally separate: to focus on saving the physical world is to harm the immortal soul.

Still, this view—though it is often expressed vocally in American political and theological discourse— is far from the only one. Another strand of Christian thought interprets the same reference to “dominion” in Genesis as an exhortation to “stewardship.” The command represents a responsibility as much as a privilege. This perspective has produced quiet movements of “green Christianity” in recent decades, from the proliferation of the idea of “creation care” among evangelicals, to the Environment Justice Program formed by the United States Conference of Catholic Bishops in 1993, to Pope Francis’scomments in his inaugural mass to “let us be ‘protectors’ of creation, protectors of God’s plan inscribed in nature, protectors of one another and of the environment.”

The stewardship mindset promoted by Francis arises from a broader theology that sees the created world as inherently sacred because it is made by God. The “fallenness” of the world may have damaged the man-nature relationship, but the ideal toward which we should be working is one of reconciliation. Such interpretations also embrace the Christian idea of salvific incarnation—that Christ represents not merely God in human form, but indeed God becoming man. If God can enter into the physical world, the logic goes, then the physical world is made all the more sacred (or even redeemed from original sin) by such a presence. The Franciscan Catholic tradition—from which Pope Francis draws not only inspiration but also his chosen papal name—is rooted in this perspective. As Patrick Carolan, president of the Franciscan Action Network, writes in U.S. Catholic: “As part of the Franciscan tradition we emphasize ‘thisness,’ the unique specialness of each particular living and nonliving thing, which is loved individually and particularly by God. Every tree every pond, every member of every species is unique and special to God.” Pope Francis defends his call for environmental action by arguing that “Creation is not a property, which we can rule over at will; or, even less, is the property of only a few: Creation is a gift, it is a wonderful gift that God has given us, so that we care for it and we use it for the benefit of all, always with great respect and gratitude.”

The eco-feminist Christian movement, which grew out of larger feminist and womanist perspectives on theology, has also flowered in both Protestant and Catholic thought. Some eco-feminists, like the Quaker Grace Jantzen, believe the demand for positive stewardship emanates from the very structure of the world. In her God’s World, God’s Body, Jantzen argued that God’s relationship to the world is analogous to the relationship between the body and the soul. Drawing on the widespread Christian doctrine of imago dei—that man is created in the “image and the likeness” of God (as per Genesis 1:16)—Jantzen maintained that our embodied state establishes creation as the “body” of God. Unlike the “dominion” schools of thought, the stewardship schools take for granted that the created world is inherently good—that there is an inherent concord, rather than conflict, between the physical and the spiritual.

In his recent remarks, Pope Francis did not go quite as far as Jantzen did. But his focus on the need for stewardship of the environment places him within this pro-environmentalist tradition, and within a wider theology that is willing to celebrate, rather than reject, the material as a gift of God.

What is radical is Francis’s willingness to present environmentalism not merely as a challenge, but as one of the “greatest” challenges of our time. By underlining the importance of environmentalism to his overall theology, Francis is doing more than simply espousing a set of principles. He is also publicly—with the dizzying reach granted to a man in his position—emphasizing an understanding of nature that, in contrast to the combative dichotomy so prevalent in mainstream politico-religious discourse, is intrinsically positive in its treatment of the physical world. It’s a vision that is, radically and profoundly, pro-life.