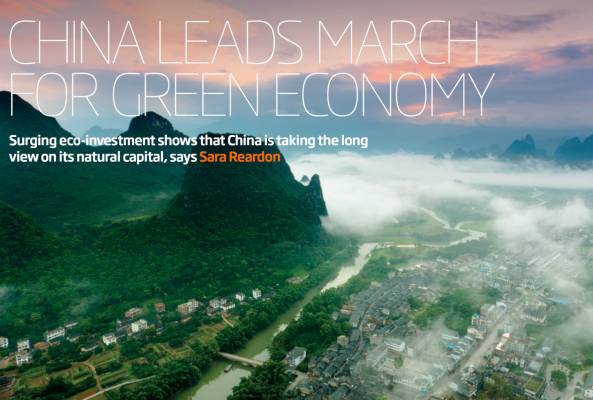 When appeals to an environmental conscience cannot motivate governments to conserve their natural resources, a swift kick in the wallet may.

Gaining traction are projects to quantify the value of “services” provided to us by oceans, forests and other ecosystems, determine the economic hit to a nation once they run out, and then paying would-be consumers to conserve those assets. And, with characteristic pragmatism, China is leading the experiment. Wait, China? It’s one of the most polluted countries on Earth, and the dizzying rise in carbon emissions and resource consumption that accompany its rapid economic growth show no signs of slowing. Yet since 1999, the Surging eco-investment shows that China is taking the long view on its natural capital, says Sara Reardon China leads march for green economy Chinese government has invested more than $100 billion in “ecocompensation” schemes, mostly in forestry and water management. “It’s the largest payment for ecosystem-services scheme in the world,” says Gretchen Daily of Stanford University in California, “and it’s China’s big way of harmonizing people and nature using very new approaches for the 21st century.”

China is anything but a paragon of environmental responsibility, but in some areas, the approach appears to be working. For instance, by paying Farmers to reforest their farmland (pictured, right), China has added 1.6 per cent to its forest cover each year from 2000 to 2010: three times the rate of any other country, according to the UN’s Food and Agriculture Organization.

“China, for a very long time, has been between a rock and hard place,” says Beijing-based analyst Michael Bennett of Forest Trends. “It has to grow economically, but now it’s finding it is reaching the limits of its natural resources.” That fact is not lost on China’s national government. Each year, the State Environmental Protection Administration assesses how much of its gross domestic product is lost to environmental damages, although for political reasons it does not make that information public.

The one report that the government did release found that environmental damage detracted $64 billion – or 3 per cent – from the country’s GDP in 2004. That shocking number is almost certainly an underestimate, says Jianguo Liu of Michigan State University in East Lansing: it could be as high as 10 per cent. Nevertheless, he says, China is ahead of most other countries in recognising the contribution of the environment to the nation’s economic success. “We think of China as a spoiled environment, and it is,” says Peter Kareiva of the Nature Conservancy in Seattle. “In a sense, that has motivated them to quantify what assets they have remaining and how they might improve how they use them.”

Human costs
It was the Yangtze floods in 1998 that made China change its ways. A commission set up by the Chinese Academy of Sciences determined that monsoons were partly responsible, but extreme logging and the erosion of and cleared for farming were major contributors. With thousands of lost lives, about 18,000 people displaced, and more than $30 billion in damages, China could no longer ignore the cost of destroying its natural resources. The national government promptly declared a blanket ban on logging near the Yangtze headwaters in 1999 and, soon after, implemented the largest ecocompensation scheme in world. As a result, the government now pays farmers to move off sloping lands and allow the forests to grow back, and pays watchdogs to report illegal logging in erosion-prone areas.

“Overall, on the biophysical side, the programmes have been a big success,” says Daily, although the economic benefits are not yet as clear. China is on track for its goal of restoring 40 million hectares of forest – an area bigger than Japan – by 2020. As of 2008, 120 million farmers had taken payment under the reforestation scheme. A 2011 study led by Daily found that the vast majority of these found new employment which offered a higher income (Proceedings of the National Academy of Sciences,DOI: 10.1073/pnas.1101018108).

More recently, says World Bank economist Carter Brandon in Beijing, the government has begun to direct its efforts towards water-resource management, a problem that cuts across energy, development, food and economic sectors. Many regional governments have already created payment schemes for protecting water sources. For instance, some provinces at the headwaters of a river have agreed that if they pollute the river, they must pay the downstream provinces in a system that is similar to cap and trade systems for carbon emissions where emitters pay for the right to emit. These schemes are beginning to be integrated into a national system.

The incentive for China to protect its resources is obvious, says Brandon. Much of the population lives in areas that are threatened by coastal storms and rising sea levels, and it has the money and the strong central government to effect changes. “China can go green and continue to grow economically,” he says. The goal is to put a number on how much money will save by protecting its natural resources rather than exploiting them with unsustainable practices.

To that end, Stanford’s Natural Capital Project – which Daily co-directs with Kareiva and others – has created a software tool called InVEST, which quantifies the economic cost of a given environmental policy decision. “The idea is to shine a light on the many values of a forest left standing,” says Daily. While sometimes it will benefit a country financially to, say, cut down a forest, the tool can show the hidden costs of flooding, and benefits of carbon sequestration and other environmental issues and solutions. Armed with a dollar value, governments can assess which policy will give the bigger return on its investment. The project is testing out this programme in China as well as in Ecuador, Colombia, Mexico and Costa Rica, which also has a national ecocompensation scheme for watershed management and forest preservation.

Analysts are hopeful that other countries will learn from China’s experience. Government academics from China and India will meet later this year to discuss ways India might improve its energy efficiency, Liu says. There have also been discussions about ways in which trade with Brazil, which supplies much of China’s timber and soybeans, might consider financial schemes that encourage sustainable forestry. From a policy standpoint, though, it’s still very early days, he says. “If these programmes can succeed in China, they can succeed in the rest of the world,” says Bennett.