Posted by archerzhh on Monday, 27 April 2015 in General Environment

Man-made Earthquakes Are On The Rise 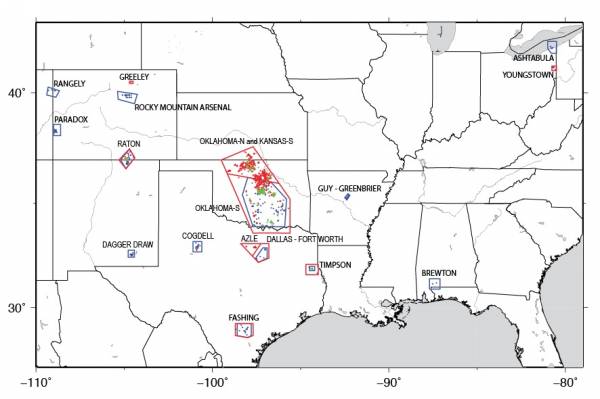 Man-made earthquakes have been on the rise in the United States, and the government is taking notice.

On Thursday, U.S. Geological Survey (USGS) released a report which, for the first time, includes human-induced earthquakes on the agency’s official seismic hazard maps. Those maps aim to calculate the risk of earthquakes in specific areas — how often they are expected to occur, and how hard the ground might shake when they do. The maps are important because they help influence building codes, insurance rate structures, and other risk prevention policies.

“These earthquakes are occurring at a higher rate than ever before and pose a much greater risk to people living nearby,” said Mark Petersen, the USGS National Seismic Hazard Modeling Project chief, in a statement. “The USGS is developing methods that overcome the challenges in assessing seismic hazards in these regions in order to support decisions that help keep communities safe from ground shaking.”

In the report, the USGS noted a dramatic increase in earthquake activity in the central and eastern United States since 2009. It also asserted that many of those quakes were likely caused by the underground injection of wastewater — specifically, wastewater from oil and gas drilling operations. The popular but controversial process of hydraulic fracturing, or fracking, produces significantly more wastewater than conventional drilling, which results in more underground injections. 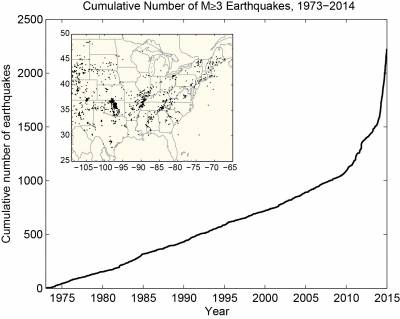 Cumulative number of earthquakes with a magnitude of 3.0 or larger in the central and eastern United States, 1973-2014. The rate of earthquakes began to increase starting around 2009 and accelerated in 2013-2014.

According to the USGS scientists, there are 17 regions within eight states — all of which “are located near deep fluid injection wells or other industrial activities capable of inducing earthquakes” — that have significantly increased rates of earthquakes. Those regions, the report said, are now 100 times more likely than they were in 2008 to have an earthquake of magnitude 3 or larger on the Richter scale.

The regions include a large portion of Oklahoma, a state which is no stranger to headlines about its dramatic increase in earthquake activity alongside the rise of fracking wastewater injection. They also include Azle, Texas — a region where, just this week, researchers linked earthquake activity to wastewater disposal.

“Predicting when and where induced seismicity will occur in the future is challenging,” the report reads. “For example, induced seismicity does not occur near every disposal well, so it is important that we continue to study and learn more about how these earthquakes are generated, so we can better assess future patterns and trends.”

Though most human-induced earthquakes have been too small to feel, some scientists have suggested that they will get stronger as wastewater injection keeps occurring.