Posted by plantitfilm on Monday, 10 September 2012 in Agriculture

Is the end of cheap food just an agricultural problem?

Food is getting scarce - and expensive. This is no longer news. But can we really confine ourselves to thinking about the agricultural end of this problem? 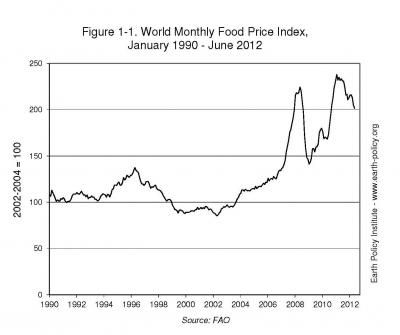 Larry Elliot writes in the Gaurdian that ‘the era of cheap food may be over’. He's absolutely right in one crucial fact; the world faces some tough decisions. Aside from that, however, this was an article from a business desk: a lightened version of human and environmental damage and a broken agricultural system that agricultural solutions will fix. But it's the wider problem that needs to be addressed.

The article covered all of the most reported fundamentals of the problem. The world population is growing, we are burning crops as bio-fuel, developing nations are eating more meat, meat is produced by feeding grain to livestock. Then there is the man-made problem we can’t instantly do anything about; changes in the climate have exacerbated a US drought and destroyed harvests. Elliot did not mention that the same has happened in Russia. Elliot likened the end of cheap food to the end of cheap oil, but failed to make the connection between the two. Modern food is flown and shipped all across the world. Using oil. Modern crops are grown using massive quantities of fertiliser produced at incredibly high temperatures. This creates carbon dioxide emissions, which contribute to global warming. This temperature is created using oil or gas, which costs money. This is to say nothing of depleting reserves of phosphate rock that are needed to produce industrial fertiliser; phosphate rock prices have increased by more than 300 per cent in recent years, a rise that makes the price of oil barrels look stagnant.