Posted by ep-admin on Thursday, 18 November 2010 in Fishing

Plan To Save Blue Tuna Fails

BRUSSELS — France, Spain and other Mediterranean nations forced the European Union to retreat Thursday from an ambitious plan to save the threatened and prized bluefin tuna.

After drawn-out negotiations, the 27-nation EU abandoned a plan to seek cutbacks in fishing quotas based only on scientific advice and said Thursday it will now also consider the interests of tuna fishermen. 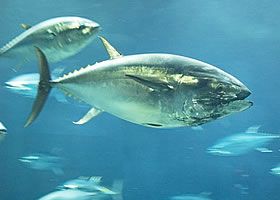 Representatives from 48 countries around the world are preparing to set fishing quotas for the Atlantic bluefin, whose tender red meat is popular in sushi in Japan. That meeting in Paris started Wednesday and continues through Nov. 27.

Bluefin tuna stocks in the eastern Atlantic and the Mediterranean have dropped 60 percent from 1997 to 2007, and the current Mediterranean fishing quota is 13,500 metric tons a year.

Some conservationists want quotas slashed at the international meeting, while others want fishing suspended entirely, saying that illegal fishing is rampant in the Mediterranean. The conservation group WWF says the species is "on the brink of extinction."

EU Fisheries Commissioner Maria Damanaki said her latest negotiating mandate "is not based on the Commission's proposal," which had focused on recommendations from marine scientists. She now must defend a position at a meeting of the International Commission for the Conservation of Atlantic Tunas, or ICCAT, that she does not agree with.

"Nevertheless, the Commission will respect its obligations as the negotiator on behalf of the European Union," she said in a statement.