Posted by ep-admin on Friday, 01 October 2010 in Transportation

Washington, D.C. Astronomers have found a new, potentially habitable Earth-sized planet. It is one of two new planets discovered around the star Gliese 581, some 20 light years away. The planet, Gliese 581g, is located in a "habitable zone"—a distance from the star where the planet receives just the right amount of stellar energy to maintain liquid water at or near the planet's surface. The 11- year study, published in the Astrophysical Journal and posted online at arXiv.org, suggests that the fraction of stars in the Milky Way harboring potentially habitable planets could be greater than previously thought—as much as a few tens of percent. 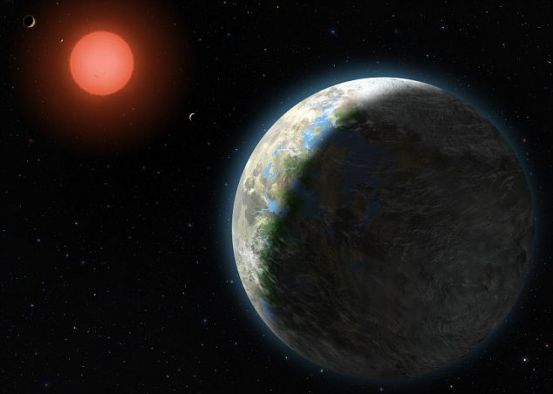 The new study brings the total number of planets around Gliese 581 to six and, like our own solar system, they orbit their star in nearly circular orbits. The scientists, members of the Lick-Carnegie Exoplanet Survey, collected 11 years of radial velocity data on the star. The radial velocity method looks at a star's tiny movements in response to the gravitational tug from orbiting bodies. The team tracked the motion of the planets to a precision of about 1.6 meters per second.

The amplitude and phasing of the star's subtle gravitational reactions allow researchers to determine a planet's mass and orbital period. The planet's radius is estimated by making assumptions about its composition, and its surface gravity is calculated from its mass and radius. Astronomers can also determine the planet's equilibrium and surface temperatures, which help to determine the potential for habitability. Equilibrium temperature reflects the balance between the energy emitted from the planet and the thermal energy received from the star. The surface temperature is estimated by the planet's distance from the star and a range of guesses about the composition of its atmosphere. To be habitable, the temperatures must not be too hot, which would vaporize water, nor too cold.

"Our calculations indicate that the planet is between 3.1 and 4.3 Earth masses, has a circular 36.6-day orbit, and a radius estimated between 1.2 and 1.5 Earth radii," remarked co-author Paul Butler of Carnegie's Department of Terrestrial Magnetism.

Its semi-major axis—half the length through the long direction of its elliptical orbital path—is 0.146 astronomical units (one AU is the distance between the Earth and the Sun), and its surface gravity is similar to Earth's at 1.1 to 1.7 g.

Habitability depends on many factors, not just the temperature. The gravity has to be strong enough to hold an atmosphere, for instance, and the temperature must be lower than about 26° F somewhere on the planet. The researchers estimate that the surface temperature of the newly discovered planet is between -24° F and 10° F. The surface would be blazing hot on the side facing the star and freezing cold on the dark side. The planet might be tidally locked to the star—with one side always facing the star, and the other side always dark and cold. This serves to stabilize the planet's surface climates, according to Steven Vogt, co-author and professor of astronomy and astrophysics at UC Santa Cruz. The most habitable zone on the planet's surface would be along the line between shadow and light, with surface temperatures decreasing toward the dark side and increasing toward the light side.

Temperatures on Earth vary tremendously, and life can thrive in very extreme environments, ranging from Antarctica, where the temperature can get to -94 ° F, to extremely hot hydrothermal vents, which roil at 235 ° F.

The fact that the researchers were able to detect this planet so quickly and so nearby (in astronomical terms) suggests that habitable planets could be quite common.

NSF will host a press briefing 1 p.m. EDT, Sept. 29 For more information on the briefing contact Lisa-Joy Zgorski, NSF (703) 292-8311 This email address is being protected from spambots. You need JavaScript enabled to view it.

The Carnegie Institution for Science (carnegiescience.edu) is a private, nonprofit organization headquartered in Washington, D.C., with six research departments throughout the U.S. Since its founding in 1902, the Carnegie Institution has been a pioneering force in basic scientific research. Carnegie scientists are leaders in plant biology, developmental biology, astronomy, materials science, global ecology, and Earth and planetary science.