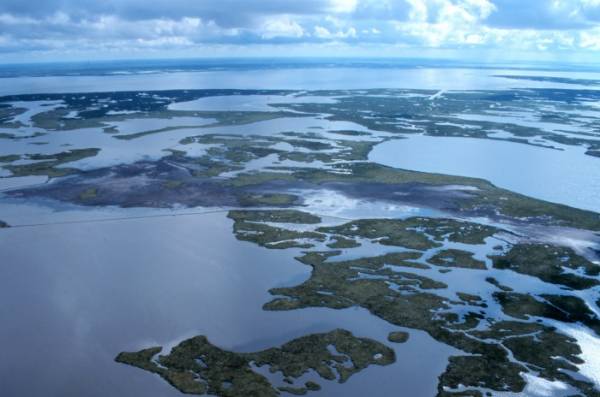 The annual pace of wetland loss increased by 25 percent between 2004 and 2009 compared to the previous six years, according to a study released late last year.

Battered by a series of hurricanes and ongoing subsidence, or sinking land, the 68 million acres of Gulf Coast wetlands had the most loss during this period. The study was conducted by the National Fish and Wildlife Service and the National Oceanic and Atmospheric Administration's Marine Fisheries Service.

Those tasked with studying local wetlands say in a more long-term time frame, the pace has actually slowed simply because there are considerably fewer wetland acres to lose now than 60 years ago.

The study notes that in addition to providing habitat for wildlife, wetlands benefit humans by improving water quality and providing protection to coastal communities. A previous NOAA study found that coastal communities generated $6.6 trillion in 2011, contributing about half to the nation's gross domestic product that year.

“If you live anywhere around here, you should be concerned about wetland loss. We are not talking about people living down here saying, 'We need a place for the rabbits and birds.' We need a place for us. The wetlands protect us,” Barataria National Estuary Program Director Kerry St. Pe said.

Between 1998 and 2004, there was a net loss of 361,000 acres in coastal watersheds of the Atlantic, Gulf of Mexico and Great Lakes wetlands. Losses in the Gulf Coast region at Atlantic watersheds occurred at a rate of 60,180 acres annually, while the Great Lakes region gained wetlands during that period.