Posted by bjb41 on Monday, 17 November 2014 in Ocean/Seas/Coastlines 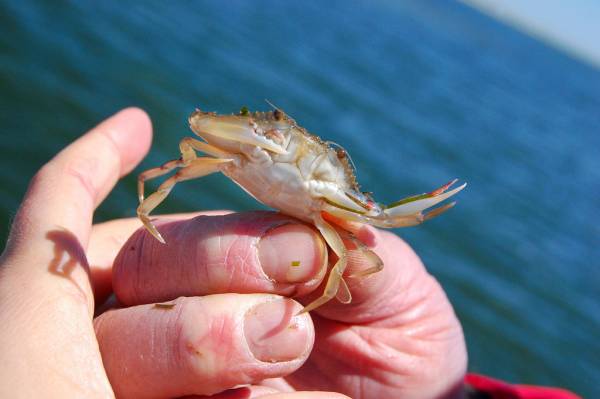 The waters off the coast of New England are warming more rapidly than almost any other ocean region on earth. Scientists are now studying the resulting ecosystem changes, and their findings could provide a glimpse of the future for many of the world’s coastal communities.

by rebecca kesslerAfter hauling in the cages at his island oyster farm near Biddeford, Maine, Mark Green's boat is loaded with crusty marine life. Baskets of oysters are there, but so are green crabs — invasive and inedible. "My boat will be full," Green says. "The bottom will just be this undulating mass of green crabs by

Sandy Richard/Flickr
Green crabs have been proliferating in the waters of the Gulf of Maine recently.

the end of the day. I mean thousands." A native of Europe, green crabs have been present on the U.S. East Coast for more than a century, but until a couple of years ago they didn't cause much trouble in Maine. Now, thanks to rapidly warming waters, their population has exploded. While they don't bother the tough-shelled oysters, the crabs are laying waste to the region's softshell clams — another important commercial stock — and devastating its seagrass meadows, which Green, an environmental scientist at St. Joseph's College in nearby Standish, calls "the most crucial habitat that exists in an estuary.""It's crazy," Green says. The seething, skittering masses of green crabs and mudflats depleted of clams and seagrass are just a few signs of big changes underway in the Gulf of Maine, the pool of Atlantic waters stretching from Cape Cod to southern Nova Scotia. Scientists report that the gulf's waters are warming faster than 99.85 percent of the rest of the world's oceans, and the marine ecosystem is reorganizing itself apace. The changes are so striking — and the fishery they affect is so important to the region's economy and identity — that they are under close watch by the area's many marine scientists. Observers say the gulf has become a "living laboratory" for how climate change could play out in marine ecosystems around the world. "At minimum what we're seeing now is a window to what we expect our average conditions to be in the middle or towards the end of the century," says Andrew Pershing, chief scientific officer at the Gulf of

Only three other places on earth are heating up as fast as the Gulf of Maine.

Maine Research Institute. "We're kind of seeing a glimpse of the future." Pershing cautions that it remains unclear how much of the warming trend is driven by climate change and how much is simply a result of the gulf's natural variability, and he suggests that the gulf could cool again somewhat in the short term.But it is clear, Pershing says, that only three other places on earth are heating up as fast as the Gulf of Maine. Using long-term ocean-temperature data, Pershing and a colleague documented the gulf's rapid warming — including an uptick of roughly three degrees Celsius over the past decade. In 2012, a massive, unprecedented oceanic heat wavedescended on the entire northwest Atlantic with the gulf at its epicenter, making it the warmest year on record. Last year proved to be the second warmest ever documented, but Pershing says 2014 may beat that — despite last winter's frigid "polar vortex." Scientists are also documenting other dramatic environmental transformations in the gulf related to rising greenhouse gas emissions, says Jon Hare, oceanography branch chief for the National Oceanic and Atmospheric Administration's Northeast Fisheries Science Center in Narragansett, Rhode Island. Ocean water is becoming fresher, most likely due to Arctic ice melting into the Labrador Sea, one of the gulf's main water sources. Precipitation is increasing, particularly heavy precipitation during storms. And forthcoming research from NOAA confirms that the gulf is becoming more acidic due to rising atmospheric carbon dioxide levels, Hare says.All of this is happening against a backdrop of more familiar problems, like overfishing, pollution, and chronic low-oxygen hotspots, which scientists say can combine to stress organisms and make it difficult to pinpoint why they may be struggling."Across the physical spectrum there have been a lot of changes," Hare says, and the gulf's marine life is responding fast, starting at the very bottom of the food web. Hare says there is evidence that seasonal blooms of phytoplankton and zooplankton are changing their timing, magnitude, and species composition, and that these shifts could reverberate throughout the ecosystem, although further research is needed to understand how. Most striking to Hare and other observers are the species from further south that are turning up in waters once too cold for comfort. Strange sightings peaked during the warmest years of 2012 and 2013, although

‘Clearly there’s a big shift going on, which I can’t help but suspect is global warming,’ says one marine scientist.

some reports have continued to roll in this year, they say. Longfin squid, normally found only in the southern gulf and below, rushed north into the gulf's coastal waters in greater numbers than anyone could remember, prompting a squid-fishing spree from the tip of Cape Cod to New Brunswick in Canada. Maine lobstermen hauling their traps found triggerfish, typical of the Carolinas and south, and scientists reportedly even spotted tropical species like filefish and snowy grouper in Maine waters. One species generating a lot of chatter is the black sea bass, an aggressive, territorial reef fish that used to range mainly from the Gulf of Mexico to Cape Cod. Gulf of Maine lobstermen were surprised when it began showing up regularly in traps a few years ago, says Marissa McMahan, a doctoral student at Northeastern University in Boston. McMahan grew up crewing on her father's lobster boat, but didn't see her first black sea bass until 2012. A dozen appeared in their traps that summer, she says. When fall came, McMahan went off to graduate school and decided to focus her research on the species. The next summer her father sent around 40 black sea bass from his traps for her to examine. She heard similar accounts from other fishermen, whom she relies on for samples and reports of sightings. "It skyrocketed, the amount of fish that they were catching as bycatch. I mean, it went through the roof." McMahan says many fishermen and scientists are concerned black sea bass, voracious eaters, may be developing a taste for juvenile lobsters as they settle into their new home in the gulf. On the bright side, she says, they are also wondering whether sea bass might turn into a new commodity, since the species generates a good price in its native range, where it's fished commercially.Meanwhile, the gulf's native species are shifting fast, too. Populations of cod and northern shrimp, once fishing industry pillars, have plummeted. This month officials announced historic emergency measures to protect cod that effectively shut down the gulf's iconic fishery, at least until spring, after survey results showed stocks around 3 percent of what would constitute sustainable levels. This follows the closing of the northern shrimp season altogether for a second year in a row due to dwindling stocks across the entire North Atlantic. What remains of the cod and the shrimp populations appear to be moving north into cooler waters, leaving devastated fishing families in their wake. By contrast, the lobster fishery is flourishing. It now dominates the region's post-cod fishing economy, and it's probably no coincidence that cod was

Scientists are starting to think of the region as a case study for other parts of the world.

once a major lobster predator, scientists say. But even the lobsters' abundance may be precarious. They've been shedding their shells earlier and earlier in the spring, and during the 2012 heat wave they molted a full month earlier than usual. A staggering early catch flooded the marketthat year and caused prices to plunge. Though the catch has stabilized and lobstermen are making money again, there is some uneasiness about the future.Green points out that only two studies have explored how lobsters might respond to ocean acidification, with contradictory results. And a disease that rots their shells seems to be creeping slowly northward, he notes, after quickly wiping out lobster industries to the south within a year or two. Many observers see an ecosystem-wide pattern that extends beyond commercial stocks and will require a great deal more research to fully understand. "There's this big change happening in the Gulf of Maine in general, for whales and turtles and dolphins and gulls and fish and lobsters and just everything," says Kathleen Hunt, a research scientist at the New England Aquarium in Boston who studies whales and sea turtles. "Every population I know of is changing its distribution. It's either appearing where it didn't used to be or it's disappearing from where it did used to be, or it's starving, or it's getting a new disease."Clearly there's a big shift going on, which I can't help but suspect is global warming," she adds. "But as scientists we're not allowed to say that yet till we see if it's a 20-year trend or not."

No one wants to wait that long for answers. New research initiatives are looking directly at how climate change is playing out in the Gulf of Maine, with the goal of helping fishermen and managers adapt to what may be one of the fastest-changing ecosystems in the world. NOAA, for instance,has developed new methodology for quickly assessing how vulnerable marine species are to climate change, starting with 79 species from the northeastern U.S. and southeastern Canada, including the gulf. Hare, the project lead, says he expects the techniques will be applied elsewhere. Scientists are starting to think of the region as a case study for other parts of the world that remain relatively stable for now, Pershing says. "What we've seen is something that everybody around the world is going to be seeing at one level or another, maybe at a more gradual rate, maybe at a faster rate," Pershing says. "But we've seen it here, and I think we have a real duty to learn from it."