Posted by plantitfilm on Sunday, 23 February 2014 in Clean Water 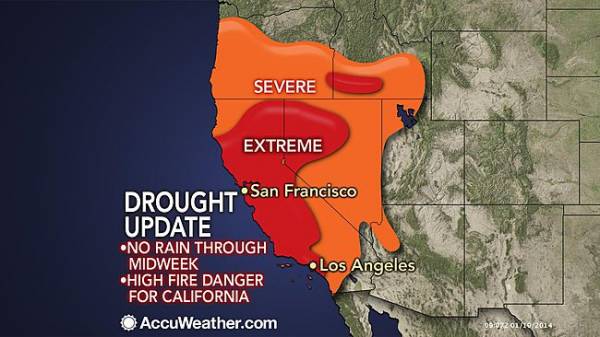 The skinny rings of ancient giant sequoias and foxtail pines hold a lesson that Californians are learning once again this winter: It can get very dry, sometimes for a single parched year, sometimes for withering decades.

Drought has settled over the state like a dusty blanket, leaving much of the landscape a dreary brown. Receding reservoirs have exposed the ruins of long-forgotten towns. Some cities are rationing supplies and banning outdoor watering. Many growers are expecting no irrigation deliveries from the big government water projects that turned the state's belly into the nation's produce market.

Recent storms in Northern California and forecasts of more to come in the next week or two have lessened fears that this drought will break records as the worst in modern times. But it is unlikely to end soon, highlighting the vulnerability of the state's water supply.

Even when nature behaves, there are too many water demands for them all to be satisfied.

"California is running out of options to deal with the fact that it has basically been relying on more water than it has long-term access to," warned David Hayes, a former U.S. Interior Department official who was the Obama administration's point man on Western water issues during the president's first term.

"It's like reality is closing in on California," Hayes said.

A decade ago the state agreed to stop using more than its share of Colorado River water, cutting an important Southland supply. So much water is diverted from the watersheds of the state's two largest rivers, the Sacramento and San Joaquin, that their common delta is on the brink of ecological collapse, triggering environmental restrictions on delta exports.

Agriculture chronically pumps more water out of Central Valley aquifers than man or nature puts back. During droughts like this, growers use up even more groundwater, compounding the problem. The state's acreage of almond and other nut and vine crops has ballooned, hardening the demand for irrigation supplies during dry spells.

A warming climate is shrinking the Sierra Nevada snowpack that acts as a natural reservoir. And although it is unclear exactly how climate change will affect precipitation levels in California, rising temperatures mean farm fields and suburban yards will dry out more quickly.