Posted by Calle on Tuesday, 18 March 2014 in Climate Change

The Frozen Truth about Glaciers 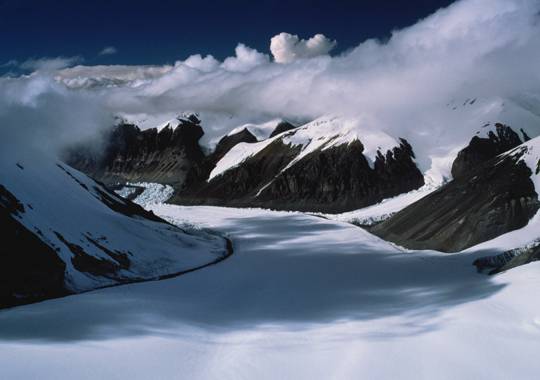 Lewis Owen has been scraping out icy fragments of history's truth from one of the most glaciated regions on Earth for the past 25 years.

His frequent excursions to Tibet and the Himalayas have led the University of Cincinnati professor of geology to some cold, hard facts.

Owen knows climate change is immortal – fluctuating across millennia, patiently building toward moments when circumstances are ripe for apocalypse. It was true thousands of years ago, when rapid climate change had profound effects on landscapes and the creatures that lived on them. That scenario could be true again, if the past is ignored.

"We're interested in how glaciers change over time as climate has changed, because we're in a changing climate at the moment, dominantly because of increased human activity," Owen says. "From understanding past glacial changes, we can understand how glaciers may change in the future."

Owen, head of UC's Department of Geology, is among a team of researchers at the university who have been gathering and studying years of data on Tibet and the Himalayas. Members of the group contributed to two research papers that will be published in the March 15 edition (Vol. 88) of Quaternary Science Reviews, an international, multidisciplinary research and review journal.

Owen is primary author on "Nature and Timing of Quaternary Glaciation in the Himalayan-Tibetan Orogen," and Madhav Murari, a post-doctoral fellow at UC, is primary author on "Timing and Climatic Drivers for Glaciation Across Monsoon-Influenced Regions of the Himalayan-Tibetan Orogen." The National Science Foundation and National Geographic Society have supported the research efforts of Owen and his team.

Glaciers are fickle beasts. They don't all respond to climate change in the same way. Some recede while others surge, and these changes can have a profound effect on landscapes – at times to dangerous effect. Glacial lakes, which swell as glaciers melt, can drain in catastrophic fashion, known as glacial lake flood outburst. Owen says consequences of such outbursts can be severe, wiping out entire villages or ruining acres of farmland. Comparing glacial areas and anticipating melt is a complex problem but one that underscores the importance of his research, Owen says.

"Glaciers will vary from one side of the mountain range to the next very differently. As part of our research, we're building up a standard scheme that people can use to compare their glaciated areas," Owen says.

The environmental stakes are as high as the mountains themselves. Tibet and the Himalayas are nearly one-third the size of the contiguous 48 U.S. states, and nearly a billion people live in the mountains' shadow. Waters from the glaciers flow into the Indo-Gangetic Plain, a fertile region including parts of Bangladesh, India, Nepal and Pakistan, and bordered to the north by China. The source water for some of the world's largest rivers – the Indus, Ganges, Yangtze and Yellow – is derived from these glaciers.

On an even broader scale, Owen notes the Himalayas and Tibet also have a major influence on regional and global atmospheric circulation, magnifying their importance in understanding the dynamics of global environmental change.

PASSING THE TEST OF TIME

To help predict the future, Owen and his colleagues look to the past. Researchers in Owen's group use advanced geochronology techniques such as cosmogenic and luminescence dating to more accurately determine the age of their samples. The results give scientists a clearer picture of how to reconstruct glacial response to climate change from as far back as when the glaciers were first formed many hundreds of thousands of years ago in the Quaternary Period, a geologic time period that includes the ice ages and extends to present day.

In essence, without knowing what glaciers were doing in the past, Owen says, computer models of global climate change can't be accurately tested.

"Our studies are providing a framework for understanding past glaciation to implicate future changes," Owen says. "We want to be able to manage mountain areas and sustain them so future generations can live and work and play up there."

Several members of Owen's Tibetan Himalayan research team are part of the University of Cincinnati's Quaternary and Anthropocene Research Group (QARG), a multidisciplinary group focused on integrative research and teaching of geology, paleontology, climatology, anthropology, ecology and landscape evolution across recent geological past, including the ascent of humankind. QARG is a premier, public, urban research group dedicated to undergraduate, graduate and professional education; experience-based learning; and research in Quaternary science and the study of the Anthropocene. QARG is part of the UC Forward innovation collaborative and another example of what it means to be Cincinnati Smart – a unique and effective way of learning that combines excellent classroom experiences with real-world opportunities through experiential options made possible at UC.