Posted by Tiny on Friday, 26 September 2014 in Sustainable Development

People Stand Up to Protect What They Love 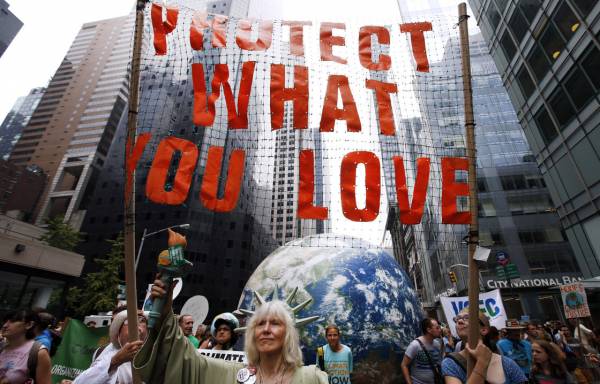 The forecast calls for picture-perfect weather Tuesday in New York City as world leaders gather to discuss the challenge of a changing climate.

More than 120 leaders, including President Obama, are expected to attend the one-day climate summit, sponsored by the United Nations. They've been instructed to arrive with "bold ideas" to slow the rise in global temperatures.

Several hundred thousand climate activists marched through midtown Manhattan on Sunday. The demonstration, dubbed the People's Climate March, was intended to turn up the heat on a U.N. process that's sometimes glacially slow. Elana Sulakshana was part of a sizable contingent who marched from Columbia University.

"It's really exciting. I've never seen so much energy around an issue," Sulakshana said. "People just seem ready to take on the world leaders who haven't been doing anything on climate change."

Climate experts say there's little time to waste. A surge in carbon dioxide last year pushed greenhouse gas levels to an all-time high. According to the National Climate Assessment, the past decade was the hottest on record in the United States. This spring, President Obama told WLTX television in South Carolina it's not too late to turn things around.

"That's something we can do, but only if the American people push Washington to do it," the president said. "Because typically politicians are wary about doing something on their own, particularly if they're not sure the public supports it."

And Americans are deeply divided, about not only how to address climate change but whether it's a problem at all. Carroll Doherty of the Pew Research Center says in a poll last month, 68 percent of Democrats called climate change a major threat to the U.S., concern on a par with Islamic extremism. But only 25 percent of Republicans feel that way.

"It's one of the most partisan issues we track," Doherty said. "Republicans just do not see it as an imminent problem for the United States. But Democrats by and large do."

Even among Democrats, there's disagreement about how far to go in controlling greenhouse gases. Many Democrats from big coal-producing areas, for example, are not happy with the president's planned EPA regulations clamping down on coal-fired power plants.

But if action on climate change is a liability with some voters, Democrats hope to make it an asset with others.

"In many of these campaigns, climate is being used as a wedge issue, focused on Republicans," said Chris Lehane, a Democratic strategist for a climate superPAC that's pumping money from billionaire Tom Steyer into a half-dozen close contests around the country. "And that to me is a real sign that climate politics [are] on the move and on the move in a good direction."

Lehane says climate issues resonate with young voters and, if properly framed, with African-Americans and Latinos, precisely the groups most likely to sit out the midterm elections. Lehane says a climate message can help mobilize those voters if it's presented not as an esoteric issue about polar bears, but as a close-to-home concern such as drought, smokestack pollution or the rising cost of flood insurance.

"You do need to bring it down to the kitchen table, so that people actually understand the impact it's having on them, their families [and] their kids," Lehane said. "When you do that, it's an entirely different conversation, and people are motivated in terms of who they're going to vote [for] and whether or not they're going to turn out to vote."

The outcome of those November contests will help to determine how much of a weapon climate action — or inaction — may be in future U.S. political campaigns.

This week's New York summit is designed to set the stage for another round of international climate negotiations in Paris next year. The White House says President Obama will be in a better position to lead that effort if he's able to set an example here at home.