Posted by jennystorie on Monday, 16 March 2015 in Climate Change

Rising temperatures may result in more snow falling in Antarctica 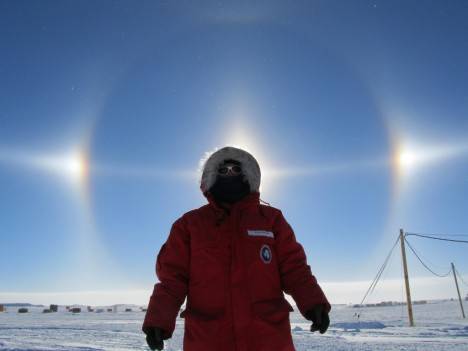 It may sound unlikely, but the evidence is mounting that the more the Antarctic warms under the impact of climate change, the more snow will fall on it.

Not only that, says a team of European and US scientists, but as the snow turns to ice it is going to flow downhill, borne by its own weight, and contribute to rising sea levels.

The impact of this paradoxical process is likely to be significant. The team, led by scientists from Germany‘s Potsdam Institute for Climate Impact Research (PIK), says each degree Celsius of warming in the region could increase Antarctic snowfall by about 5%.

The suggestion that Antarctic snowfall is increasing is not itself new, though not all scientists accept the data without qualification.

What the Potsdam scientists have done is important, not simply because they provide new evidence to support the contention, but because they explore its potential consequences.

Katja Frieler, climate impacts and vulnerabilities researcher at PIK, and lead author of the report, says: “Warmer air transports more moisture, and hence produces more precipitation. In cold Antarctica, this takes the form of snowfall. We have now pulled a number of various lines of evidence together and find a very consistent result: temperature increase means more snowfall on Antarctica.”

To reach a robust estimate, the PIK scientists collaborated with colleagues in the Netherlands and the US.

“Ice-cores drilled in different parts of Antarctica provide data that can help us understand the future,” says co-author Peter U. Clark, professor of geology and geophysics at Oregon State University.

“Information about the snowfall spanning the large temperature change during the last deglaciation [the uncovering of land by the melting of glaciers], 21,000 to 10,000 years ago, tells us what we can expect during the next century.”

The researchers combined the ice-core data with simulations of the Earth’s climate history and comprehensive future projections by different climate models, and were able to pin down temperature and accumulation changes in warming Antarctica.

The increasing snowfall on the continent will add to the mass of the ice sheet and increase its height.

But the researchers say it won’t stay there. On the basis of another previous PIK study, they say the extra snow will also increase the amount of ice flowing to the ocean.

As snow piles up on the ice, its weight presses down – the higher the ice, the greater the pressure. Additional snowfall elevates the grounded ice-sheet on the Antarctic landmass, but has less of an effect on the floating ice shelves at the coast, allowing the inland ice to flow more rapidly into the ocean and raise sea levels, the researchers say.

The 5% increase in Antarctic snowfall that they expect for every 1°C rise in temperature would mean an estimated drop in sea-level of about three centimetres after a century.

But they say other processes will cause an eventual rise in sea-level. For example, relatively slight warming of the ocean could cause coastal ice to break off more easily, allowing more of the continental ice mass to discharge into the ocean.