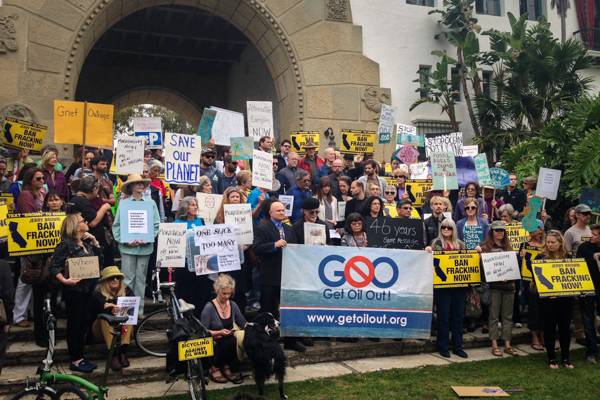 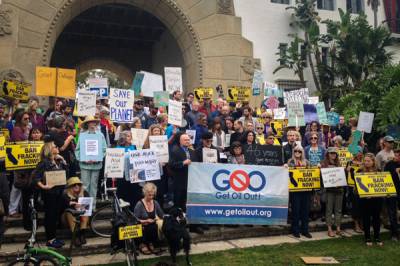 “We need Governor Brown to enact an emergency moratorium on onshore fracking,” Claassen said. “Fracking and extreme extraction represent an expansion of oil and gas development in California, when we should be phasing it out.”

According to Environmental Defense Center Chief Counsel Linda Krop, oil drilling and usage can lead to harmful environmental effects despite extensive precautions and technological advancements in oil drilling and transport across the industry, a problem that she said is evidenced by the May 19 oil spill at Refugio State Beach.

“This tragedy reminds us that oil development is inherently dangerous and risky, there is no way to prevent a spill like this from happening,” Krop said. “This spill happened from a relatively new pipeline with modern technology, regulated under current laws and, yet, look what happened.”

UCSB alumna and 350 Santa Barbara member Susan Braden said, in addition to tarnishing the beach, the Refugio oil spill will damage marine life and contaminate locally caught seafood. According to Braden, the spill is a “slow moving kind of disaster” that will continue to affect Santa Barbara for years to come.

“It isn’t just beauty … that oil will find its way into our food chain and the fish that we eat that are caught locally,” Braden said. “The ramifications for this are going to go on for years and years.”

“There’s a proposal to expand drilling right off of Isla Vista onshore … they want to parallel drill horizontally along the whole Isla Vista coastline,” Davis said. “UCSB was just named the greenest public university of the country, it’s not right that they would expand drilling there and connect to that pipe that just burst.”

Carbajal said the oil spill is both economically and environmentally harmful, and Santa Barbara should shift away from fossil fuels and towards more sustainable forms of energy.

Schneider said the county requires an energy solution that will continue to provide jobs to those currently in the oil industry.

“We need to figure a way to get away from fossil fuels and … to do it in a way that allows people who are currently in the industry to be able to have jobs and to be able to move forward in a way that’s economically sustainable for them,” Schneider said.

Chumash Elder Marcus Lopez said indigenous communities globally have advocated for expanded environmental conservation efforts for decades and will continue to do so. The Chumash people are Native Americans who have resided in Santa Barbara for millennia.

“Indigenous populations throughout the world have been crying out for the last 50 or more years about how we have to … respect our mother earth, how we have to realize our relationship with one-[another],” Lopez said. “Let’s roll up our sleeves, men and women, children of all ages, and go in this direction with a vision of the future.”

Fourth-year UCSB sociology major Paige Craine said she is in favor of halting fracking despite its profit potential. According to Craine, the youth population has the ability to make a difference through protests and similar events.

“I think [a moratorium] is a good first step, I think the best thing is to ban [fracking] altogether but I know that that’s hard especially because people make money off of it,” Craine said. “I think the younger generations like us being here today is really important because it is our future and if we say we want them gone, hopefully they’ll listen.”