Posted by hzicko on Thursday, 24 September 2015 in Arts and Entertainment

An Interview with Louie Psihoyos Director of Racing Extinction 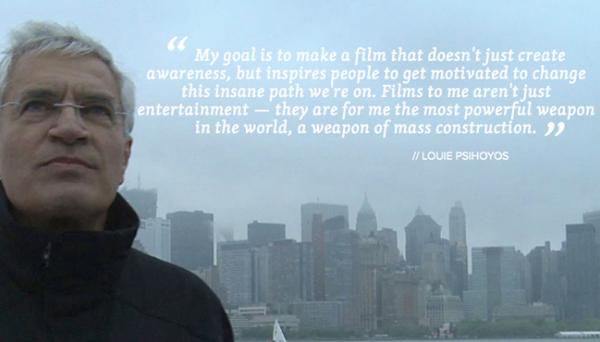 Unless you’ve been living under a rock the past year+, you’re already aware of the latest motion picture project from the team responsible for the Oscar-winning documentary The Cove. Though the name has changed (at one time titled Six and at another time called The Heist), Racing Extinction has done a remarkable job over the course of the past 12+ months promoting not only its existence as a film, but also its greater mission. That mission, as most Ecorazzi readers well know, is to expose the hidden world of endangered species and race to protect them against mass extinction.

With the help of Vulcan Productions and Obscura Digital, director Louie Psihoyos brought high tech tactics to both screen and street. From a tricked out Tesla to large-scale projections illuminating major monuments the globe over, Racing Extinction is more than just a movie — it’s a movement. It’s a siren song, a wakeup call to the masses to pay attention to and act on what’s actually happening. Fortunately, average viewers of the doc and witnesses to these elaborate visual stunts can make a difference in their everyday lives.

During our interview, which took place Wednesday, Psihoyos offered some solutions, one of which proves as simple as evolving the way we eat. Bite by bite we can do our part to curb climate change and back away from the brink. Though, of course, the good we can do to reduce our carbon footprint emissions doesn’t stop there. More on that in a moment.

Psihoyos, who is also executive director of the Oceanic Preservation Society (OPS), got his start shooting still photography for National Geographic. He has shot hundreds of covers for other magazines, too, including Fortune Magazine, Smithsonian, Discover, GEO, Time, Newsweek, The New York Times Magazine, New York Magazine, Sports Illustrated and Rock and Ice. His work has also appeared on National Geographic Television, the History Channel and the Discovery Channel.

The latter network will air Racing Extinction on December 2, delivering groundbreaking undercover detective work and never-before seen images to anyone the globe over with a comprehensive cable package. But, before then, cinema fans can catch this larger-than-life exposé on the big screen in select cities. RE opens this weekend in New York City, Los Angeles, Columbus, Laguna Niguel, Minneapolis, Portland and Durham. For a complete list of locations and dates (a host of cities will welcome the doc tomorrow, a week from today and thereafter), click here.

Psihoyos, you’ll find, is the perfect person to lead viewers as he ventures into the unknown. Though he is clearly well traveled and erudite, he’s likewise as awed as we are to unearth the stark realities lurking beneath the surface. He’s taking things on for the first time in some scenes and it’s refreshing to learn alongside him. He’s an educated everyman, approachable and accessible and pleasure to watch as well as talk to.

Read on to learn more from the man himself as he discusses with us both swift successes and ongoing efforts, plans for the future — including a trip to Europe with the electric car and a long overdue doc already in the works — why he became vegan and how we can, each and every one of us, prevent the planet from sinking into the abyss.

More than 5 years post-The Cove, what are your thoughts on what continues in Taiji?

People think you make a movie and, once you create some awareness, it should all end. But social movements take a long time. The Surgeon General’s warning [for cigarette smoking] came out in 1964. We were still smoking on planes in 1998! Almost 20 years later, you can’t [smoke] cigarettes in restaurants or bars. Movements take time. But, the killing [in Taiji] went down from 23,000 a year to less than 6,000. So, we’re getting there. It’s definitely working. It’s just a longer timeframe than we’d like. Six years later, we’re still working on Cove issues. We recently bought the rights in Japan and we’re going to give it away there for free. Certainly if you own SeaWorld stock you see the effect of movies like Blackfish and The Cove. It’s a movement that has legs and it’s gonna keep going and getting bigger.

Definitely. Speaking of, do you have an update on activist Ric O’Barry’s status?!

Ric is still in Taiji. As you know, Ric was arrested the day before the drive started for not carrying his passport. They hauled him off to jail before he had a chance to search his car — the passport was in his glove compartment! They released him a day later without charges, but were hoping to kick him out of the country. It backfired on the government because it became international news.

Right on. Will anything change in China — in particular for the businesses and individuals that were highlighted poaching endangered sea life — once the film hits wide release?

Already quite a bit has happened. There were seven illegal shark oil processing plants[that] Mr. Li [ran] in Puchi, China, [and] six have been shut down.

Shawn Heinrichs and WildAid have been phenomenally successful with anti shark finning PSAs in China. We’re working with them to do one [for] manta gill raking. We’ll release a PSA soon in that country with the same former NBA player Yao Ming. We hope to have the same success with manta rays as they had with shark fins.

On the topic of manta rays, what’s going on with the remote Indonesian village depicted in the film where hunting mantas is their core source of income?

We raised about a $250,000 to help turn the village around, turning fishing huts into bed and breakfasts [and] converting hunting boats into tourism boats. We thought we’d have to do it independently, [but] the government is actually going to help subsidize the village, help them make the conversion. A lot has happened and it’s happened rapidly. Because of the internet, because of social media, we can speed up this evolution by an order of magnitude. We don’t have to wait 50 years to make these implementations. Wehelped do a campaign to stop the shipment of shark fins, and UPS buckled after 178,000 signatures. And that took a couple weeks! This movement, it’s not Pollyanna. It’s happening right now. It’s happening a lot quicker than we think. Things are ramping up, because we have this power to connect with millions of people instantly.

A tangible facet of connecting with people instantly is Racing Extinction’s projection stunts, orchestrated to raise awareness surrounding the film and the issues it addresses. How did billionaire philanthropist Paul Allen’s Vulcan Productions get involved with this?

He’s interested in social movements. I think when you have a guy like that, obviously a high net worth individual, he wants to know how he can philanthropically make the most impact for his money. I believe they found the best way to effect change is having a good story followed by an impact campaign. That’s the way to move the needle, to create this tipping point. [When] somewhere between 10% and 15% of people have an unwavering belief in the truth, whether it’s [due to] a documentary or just by evolution of social consciousness, the rest of the people and the policies start to fall like dominos. And that’s what we’re trying to do with this film.

What do you feel are the top three ways people can have a positive impact on the planet?

2) Getting off meat is one of the calls to action. At the end of the film we [convey the fact that,] if everybody in America [ate vegan] one day a week, it’d be like taking 7.6 million cars off the road every year. Raising animals for consumption causes more greenhouse gases than all the emissions from the transportation sector combined. So the single most important — and simplest — thing a person can do to reduce their carbon footprint and to save the planet is eat more sustainably. Eat more plant-based foods three times a day. You can save the planet three times a day by eating a plant-based diet! All protein comes from plants anyway. When you become a vegan, all you’re doing is eliminating the middleman.

3) Voting for green candidates. It’s one thing for us to start a revolution from the ground up, but we need politicians on board, too. We need more politicians thinking like we’re thinking. What I mean by that is, not just thinking about their own interests, but thinking about the interests of everyone and all future generations going forward.

There are green candidates in Congress right now; Senator Sheldon Whitehouse from Rhode Island [is] one of the biggest ocean advocates we have, but he needs a constituency. Keeping people like him in office, giving him the mandate, is really important. Over 50% of republicans now believe in climate change, they’re just scared of the party line. We need to give everyone already in office already thinking like that the backing they need to do the right thing.

Cory Booker for president! So, how did you arrive at veganism?

I stopped eating land animals in 1986 when I went to a slaughterhouse. I was doing a story for Fortune Magazine. I saw animals that weren’t fully dead having their skin ripped off of them. And then I found out about halfway through making The Cove that I hadmercury poisoning. That’s when I started reducing my fish consumption. In 2010, I became vegan.

Can you briefly go into greater detail about this story you were working on?

It was on the largest independently owned cattle ranches in America. It had nothing to do with the atrocities of raising [animals for food]. I just happened to find myself at a slaughterhouse in Oklahoma. When for eight hours a day you’re surrounded by animals being violently put to death and people mindlessly doing it…I thought, “I can’t be party to this.”

Totally horrific. Good for you. Moving to a less gruesome subject, what’s going to happen with the tricked out Tesla after the film premieres?

That’s a very good question. We just kept on doing these modifications to it and it became this sort of [James] Bond-ian vehicle. We hope to take it to Europe when [world] leaders arrive [December 7 and 8] at COP 21 in Paris. We found a donor that wants to ship it. There’s also some talk of taking it to the Vatican.

So dope. Do you think Racing Extinction inspired Tesla to rethink leather interiors?

We certainly got the discussion going. All credit goes to Leilani Münter. Leilani had the first Tesla performance vehicle that had non-leather seats and we had the second. I think it’s one of the next steps in Tesla’s evolution, to make non-leather options. We have to start cutting out animal products of all forms to combat climate change. So it makes sense that the most environmentally friendly car — and the best car ever made — should have non-leather seats.

No argument there. Lastly, what’s next for you and OPS?

The next film we’re doing is a film on top athletes and nutrition — vegan athletes. Theworld’s strongest guy’s a vegan. Ultrarunner Scott Jurek, who just ran the Appalachian Trail — almost two marathons a day for 46 days — beating the previous time, he’s a vegan. Nine time world champion arm wrestler, he’s a vegan. Two time winner of the bobsled, he’s a vegan. We’re trying to dispel the world’s most dangerous myth — that men need animal protein to be a real man. The film’s being executive produced byJames Cameron. We’ve already started working on it and hope to have it at Sundance next year.