Posted by thatsenough on Friday, 22 April 2016 in Climate Change 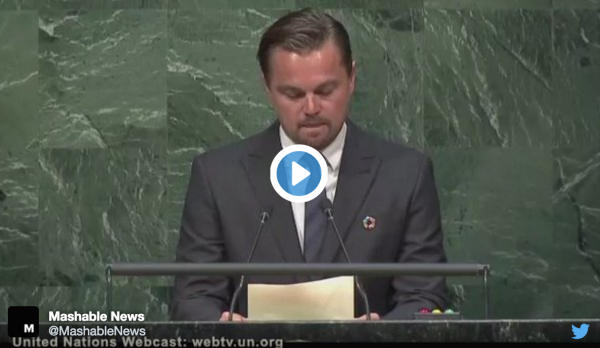 Academy Award-winning actor Leonardo DiCaprio called on world leaders assembled at the United Nations on Friday to go beyond their commitments under the Paris Agreement on climate change, and push for "bold, unprecedented action."

Representatives from more than 170 countries met on Earth Day to sign the Paris Agreement, setting a record for the most signatories to any international agreement in history on the first day it was open for signature.

“That is reason for hope,” he said.

“You know that climate change is happening faster than even the most pessimistic climate scientists thought decades ago,” he said.

The signing event, organized by U.N. Secretary General Ban Ki-moon, is intended to galvanize additional actions and ensure that the agreement enters into force sooner than initially anticipated, by 2017 rather than the original date of 2020.

In just the past several months global temperatures have spiked to levels never before seen in human history. Coral reefs around the world have been hit hard with a coral bleaching event from overheated seas. Alarming studies have been published that are pushing sea level rise projections higher.

All these facts, according to DiCaprio and other speakers, including U.S. Secretary of State John Kerry, show the need for more aggressive emissions cuts compared to what the Paris agreement spells out.

“Unfortunately the evidence shows us that it will not be enough. Our planet cannot be saved unless we leave fossil fuels in the ground where they belong,” DiCaprio said.

DiCaprio is a U.N. Messenger of Peace, and his charity foundation focuses on environmental issues, including climate change.

"We can congratulate each other today but it will mean nothing if you return to your countries and fail to push beyond the promises of this historic agreement. Now is the time for bold, unprecedented action," he said.

"The world is now watching, you will either be lauded by future generations or vilified by them."